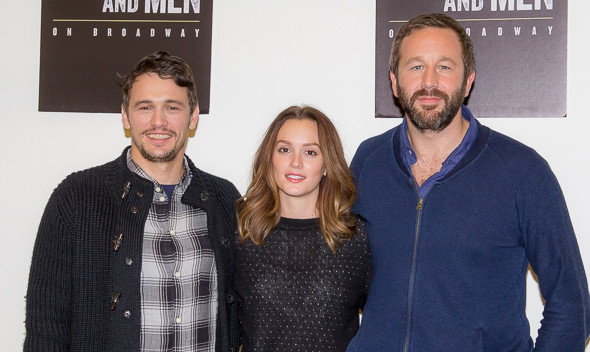 No one can be unhappy with the new Broadway production of “Of Mice and Men.” Certainly not John Steinbeck. Except for opening night last night, the audiences are young people, lots of girls, who probably think an actual rodent is involved.

They are coming for James Franco, Chris O’Dowd, and Leighton Meester, all making Broadway debuts. Franco they know from “This is the End,” O’Dowd from “Bridesmaids,” Meester from “Gossip Girl.” Most nights the audience has no idea that Anna Shapiro also directed “August: Osage County.” They probably hear it as “Orange County.”

The opening night audience was replete with stars: Joe Morton, Paul Haggis, and Jeremy Piven were scattered about. Franco’s actor brother Dave was there, as were many Franco family members including 90 year old art dealer grandmother Mitzi.

Katie Couric was also present. She had an ulterior purpose: her charity, Stand Up to Cancer, had organized the night and sponsored the after dinner at the Plaza Hotel ballroom. Swanky!

A nice touch: at the end of show, Chris O’Dowd jumped down off the stage and swooped Anna Shapiro up so she could take a bow. Nice touch.

The show: as soon as “Of Mice and Men” began I realized I was mouthing a lot of the words. Oh, those rabbits. They’re back. No one in the cast is bad; it’s just degrees of what works now and what may gel later. O’Dowd, I thought, was exceptional, totally absorbed into Lennie. You felt for him all the way through.

Franco has incredible presence, and no problem being heard. He’s a little flat in the first act, where he’s also saddled with a huge amount of expository dialogue. As he settles in, Franco’s performance will grow. For the moment, he’s just busy as George making sure the trains run on time. There are a lot of trains.

Leighton Meester would have been an excellent failure if she’d failed. After all, “Gossip Girl”? But like Blake Lively and Penn Badgely, Meester shows she has more in her repertoire. She’s not Eva LaGallienne. But she’s very likable, conveys enough to make her climactic scene memorable.