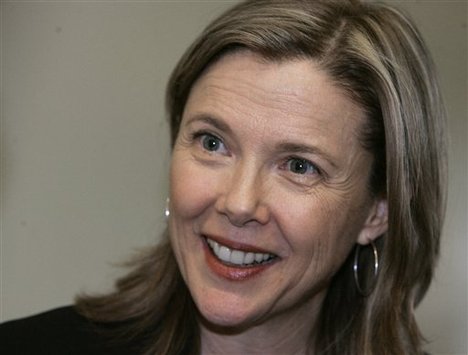 Is Annette Bening returning to New York theater at last? I am told– still unconfirmed–that Bening has agreed to play Goneril in the New York Shakespeare Festival’s production of “King Lear.” Her Lear would be John Lithgow. Daniel Sullivan is the director.

Bening rose to fame in “Coastal Disturbances” opposite Tim Daly way back in 1987– many eons ago! She hasn’t been back since then but you know, she’s a pretty big movie star.

Bening, I think, got cheated out of an Oscar for “American Beauty” and again for “Being Julia.”

Lithgow and Bening means the Delacorte Theatre will be the hot spot of the summer. All hail the Public Theater’s creative director Oskar Eustus!

Now: who will play the pther daughters? Lily Rabe is already in “Much Ado About Nothing.” She gave up the next “Hunger Games” for it. Would she have the energy? How about Lily and the Gummer sisters, Mamie and Grace?