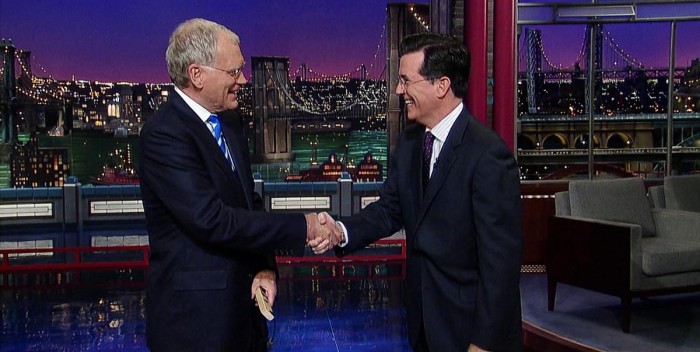 Stephen Colbert has been announced as the successor to David Letterman. I did tell you one year ago that Letterman would retire and would be replaced by either Colbert or Jon Stewart, each of whom is already signed to CBS via Viacom on Comedy Central. Stewart will now get a nice pay bump for deferring to the Letterman-like Colbert. It remains to be seen if Colbert, who plays a character on his own his show, will do well as himself.

Part 2 of this change will be moving out Craig Ferguson from the Late Late Show the show following Letterman. It does seem as though Chelsea Handler will be first in line for that spot. Would a Handler LLS from Los Angeles, where Handler lives, or New York? That remains to be seen. It would make the first woman to host a late night talk show since Joan Rivers.

And what of the Ed Sullivan Theater? Will the new Colbert show come from that venue? It’s more identified with Letterman than with Sullivan at this point. Also, Letterman’s music side is almost a business unto itself. Paul Shaffer isn’t ready for retirement. And the music production, starting with Sheila Rogers, is legendary. Will CBS chuck all that, even though Colbert has no background in that area?