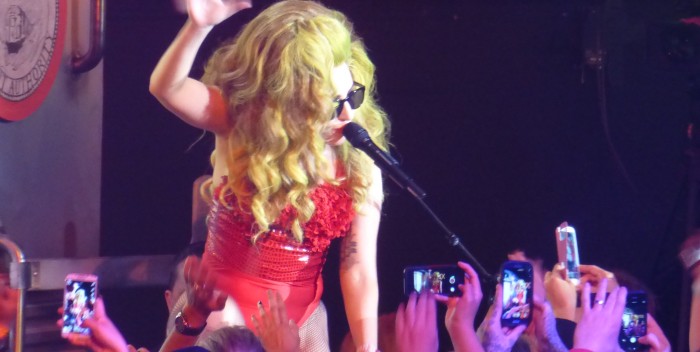 Lady Gaga’s seventh and last show at the Roseland Ballroom was also the venue’s farewell after 80 years. She gave it all she had too, with a 90 minute set that favored substance over style. She played for the audience of several thousand who were jammed onto the Roseland floor and on the mezzanine like happy kippers. The show was a greatest hits package, devoid of Jeff Koons and other ARTPOP artifice. If this is the show she’s bringing to your neighborhood, it’s 100% entertainment, a very accessible bit of public theater that you can sing along to.

The Roseland stage was covered in roses and vines, extending out to a New York City subway car built for the show and jutting out into the excited audience. I haven’t heard that much shrieking at Roseland since Madonna did a promo show there a few years ago. The difference, though,is marked: while Madonna is the better dancer/choreographer, Gaga is the musician. She sings live, full force, no fooling around. She plays that piano very much in the style of Elton John, serious but so organic that she can move around freely at the same time.

The Elton John analogy is important because Gaga synthesizes Sir Elton and Madonna and comes up with her own recipe. She lets the hits turn the crowd into a frenzy, like “Just Dance,” “Poker Face,” and “Bad Romance.” Then she adds the ARTPOP songs juiced up, friendlier than on the CD– “Applause,” “Dope,” and “You and I” never sounded better. She should do an ARTPOP Live album to replace the studio CD. She ended the 11 song set with her single, “G.U.Y.”, as an encore. That’s a real top 40 hit!

A few celebs dotted the VIP Area: Gayle King, Rita Wilson. Andy Cohen, plus Gaga’s parents, friends and family. But mainly it was a show for the people. “Will I still be here next year? ” Gaga called out from the piano. “”Enjoy me while you can!”

Don’t worry, she’ll be back. You can already tell she’s learned from the mistakes of her excessive winter. She’s getting back to basics. Best idea she ever  took and used properly. Go Gaga!

PS I’m not sure Gaga’s dad, Joe, was so happy to see me on the mezzanine. I did write a piece a few weeks ago about the money being spent from their Born this Way Foundation. That charity must get someone in there who knows what they’re doing. Otherwise their expenses are going to consultants and professionals, not to the projects they envisioned.

But none of that affects Lady Gaga the artist. It’s just accounting and can be rectified. This is why it’s always best for celebs not to start foundations. Gaga the performer is a superstar. And a rare one at a time when pop music doesn’t connect on a personal level with the audience.  That’s the great act of kindness she can give them.