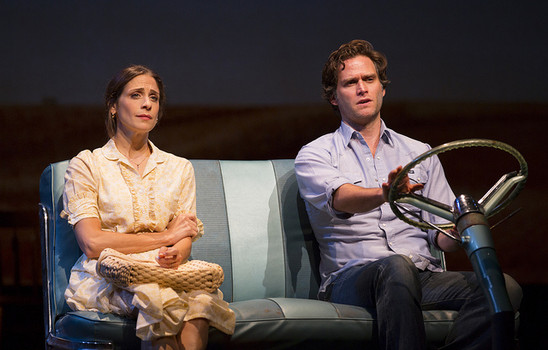 Broadway was not hot last week. It was cold, as a nasty breeze whipped through Shubert Alley. “The Realistic Joneses” finally opened last night to pretty bad reviews. Only the Times sort of liked it, but didn’t recommend it. Let’s be realistic: it’s 90 minutes and every review says it has moments but no one likes it.

I don’t know, because I didn’t see it. Unable to receive a press ticket, instead I went backstage after the Saturday matinee and said hello to Marisa Tomei. She’s a star, and a delight. The rest of the cast, as well as Marisa, is said to be very engaging. Why not? Toni Colette, Michael C. Hall and Tracey Letts are all terrific actors. But their box office was down 6% from last week.

Another Jeffrey Richards production, “The Bridges of Madison County,” is teetering. They were down 2.6% from the week before, playing at 57.7% capacity. Audiences are still trying to find the bridge on stage. (Squint.) “Bridges” may be looking for an exit soon.

“Mothers and Sons” with Tyne Daly, a play that doesn’t make a lot of sense, is playing at 50% capacity. Also a 90 minute one acter, it should be playing off Broadway with the “Joneses.”

And even “If/Then” took a tumble last week. They were down 7.2% after their opening, which means people read the reviews. The big Idina Menzel tsunami may be subsiding as reality sets in. They still did over $900K last week, so producers may sing along to “What the F—?” Stay tuned…

The best play of the year is at St. Ann’s Warehouse. “Red Velvet” is a knockout. It only plays until April 20th, so hurry. If only it were on Broadway.