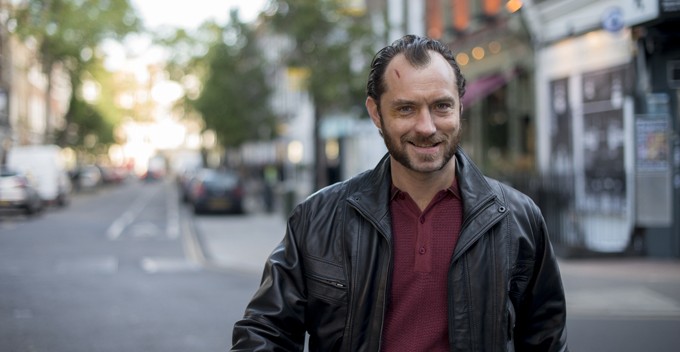 Jude Law? Isn’t he pretty young? Yup, he’s 42. And guess what? The eldest of his three children with actress Sadie Frost turns 18 this fall. Hard to believe, no? You feed these kids and this is what happens.

I think all this was conveyed by the look in my eyes when Jude told me he had a 17 year old son who’s in a band and thinking about his future. He shook his head, with an air of acknowledged self pity. “I’m old,” he pleaded. He was 23 when Raff was born.

Jude La is one of our most underrated (but at one time most hyped) actors. He opens in a new movie on April 2nd. “Dom Hemingway” gives Jude an actor’s showcase. Dom is a petty thug with a lot of charm, released from prison after 12 years. He wants to reunite with his adult daughter, played by “Game of Thrones” star Emilia Clarke. He’s already back with his second banana (Richard E. Grant, looking like Peter Fonda with tinted aviators) and his mob boss (Demian Bachir).

The movie is a little coarse in the sex and violence department. But it’s got an enjoyable edge. Jude is memorable as Dom Hemingway chews his way through the scenery. He gives what we call an out-sized performance. It’s a good antidote to the long, long winter.