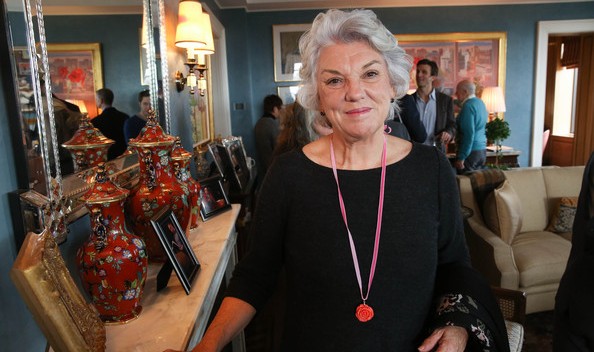 “Cagney and Lacey” was long in the past last night as Tyne Daly took hold of the stage at the Golden Theater. She stars in Terrence McNally’s sort of new 90 minute one act play, “Mothers and Sons,” with Frederick Weller and Bobby Steggert. The audience that showed up was the kind you don’t always see in one place– Bernadette Peters, opera legend Marilyn Horne, Marilu Henner, Tim Daly (Tyne’s brother), Doris Roberts (of “Everyone Loves Raymond” fame), Amy Brennerman, Elaine May and Stanley Donen, Nathan Lane, Elizabeth Ashley, and the immortal Liz Smith and Iris Love among others.

At Sardi’s after Tyne’s magnificent performance, it was like an old fashioned night on the Rialto, a flashback to a showbiz New York that is just flickering in memory. When Doris Roberts came over to Liz’s table, producer Lorraine Boyle– widow of actor Peter Boyle– jumped up and cried, “Peter’s other wife!” They embraced.

Nathan Lane whispered some secrets in Liz’s ear. Oscar winning actor F. Murray Abraham came over and said, “Liz is a Texas girl!” Abraham– who everyone thinks is from Brooklyn– told Liz he was raised in El Paso, Texas. “The place for divorces!” Liz –who’s from Fort Worth– declared. “What else?” shrugged Murray.  Elaine May and I changed seats so she could talk to Liz, and I could talk to Stanley, who’s 90, and you know, directed “Singing in the Rain” among many classic movie musicals.

All the while, most of these people were represented by their famed caricatures on the Sardi’s walls, and everyone was pointing to this one and that one who were also in the room. Meanwhile. Ben Brantley’s review in the Times was good, so a nice relief spread through the crowd. Tyne Daly will get a Tony nomination, and so will Frederick Weller. And while the play isn’t perfect, it’s very affecting thanks to Ms. Daly, who carves unexpected sympathy out of her character and leaves the audience surprised that she did.