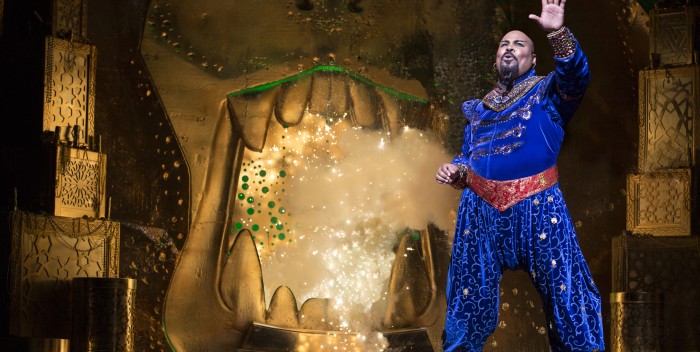 Well, I am surprised. Even though I laughed out loud at the 1992 animated “Aladdin” with Robin Williams, I didn’t think I wanted to see it as a Disney-fied musical. I was wrong. “Aladdin” — directed by Casey Nicholaw (“Book of Mormon”) is the best Disney live musical  since “Beauty and the Beast.” It’s alternately charming and spicy, with plenty for kids and a lot for adults. Plus it has an amazing score by Alan Menken with the late Howard Ashman and Tim Rice. They use all of the songs that were in the animated film plus a bunch that weren’t included.

And there’s a nicer surprise in the form of James Monroe Iglehart, who plays the Genie (Robin Williams’ part from the movie) like Luther Vandross in Las Vegas. Last seen on Broadway in “Memphis,” Iglehart is absolutely superb in every way. Of course, this big man puts fear into the audience right away as he tap dances (learned for this show), and swirls around the stage effortlessly. I thought he might induce a heart attack. But he is the motor that enlivens “Aladdin” and he’s on his way to a Best Featured Performer at the Tonys, etc.

When the Genie performs “Friend Like Me” late in the first act, the audience cannot help but be on its feet. Yes, I know opening night is full of friends and family. But I think this happen every time. It’s an old fashioned Broadway show stopper. And you don’t want to Aladdin and the Princess’s magic carpet ride. It’s a little bit of theater magic. Even the most jaded adults around me were asking “How do they do that?” while the actors sang “A Whole New World.”

The rest of the cast is also enchanting, starting with Adam Jacobs as Aladdin, and on through several excellent character actors–Brian Gonzalez, Jonathan Freeman (playing Jafar live after playing him in the 1992 movie), and Don Darryl Rivera. Then there’s Aladdin’s trio of pals, who nearly stop the show with their own clever number in Act 2–Jonathan Schwartz, Brandon O’Neill, and again Brian Gonzalez.

And yes, the audience ate it up, including Sting and Trudie Styler, Tina Fey with husband and daughter, Al Roker and Deborah Roberts with their two kids. I happened to be sitting across the aisle from Broadway legends Joel Grey and Harvey Fierstein and I can tell you they loved “Aladdin”– Harvey was sitting behind Joel and kept hitting him as they cracked up.

That’s because “Aladdin” is very much a real musical, with songs you can sing, an overture, wonderful costumes and sets, and energetic, pleasing performances. It’s not just for kids, adults will dig it. It’s refreshing after months of darkness.

So throw “Aladdin” into the Tony pool along with “Beautiful,” “Bullets over Broadway,” “Rocky,” and maybe “If/Then” and definitely “A Gentleman’s Guide to Murder.” A good season after all.