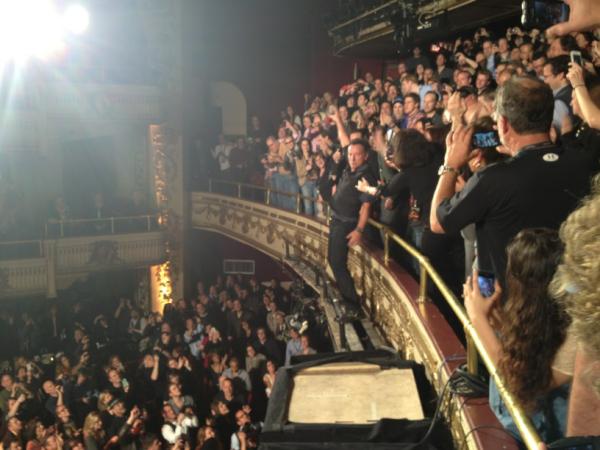 The Roseland Ballroom is shutting down next month after 92 years. (I said 80 in a prior article. Sorry! 92 is the new 80!) The owner is “developing the property”– which means it will be condos with a CVS downstairs and some chain restaurant. More NYC history gone.

So many great nights at Roseland in the last 25 or 30 years. I was there for two Steely Dan shows in 1995. Justin Timberlake did promo shows for his first solo album there. And lots of Broadway and movie premieres.

This story I wrote in 2002, from a tribute to the late great concert promoter Frank Barsalona. My late great friend Sunny Ralfini put it together. I remember it like it was yesterday.
(photo c2014 Showbiz411)

I think I’ve told you in the past what a mensch Bruce Springsteen is: He does so much charity work, and turns up for every event given by or for his friends.

Last night again Bruce was on hand, along with wife Patti, E Street Band members Max Weinberg and Little Steven Van Zandt, as well as U2’s Bono and J Geils’s Peter Wolf, for a moving celebration at the Roseland Ballroom. The occasion was the Nordoff Robbins dinner for Premier Talent’s legendary Frank Barsalona.

I will tell you now that both the Boss and Bono were very much a part of this lovely cocktails and dinner evening to raise money for a very important charity. Nordoff Robbins uses music therapy to help children and adults; they have been especially important in working with autistics and the brain damaged.

Barsalona, long an industry legend, is the man who literally invented the rock ‘n’ roll tour. He and partner Barbara Skydel have for more than 30 years operated Premiere Talent. Their famous clients include The Who and, in fact, Pete Townshend sent one of the longest video tributes I’ve ever seen at this kind of dinner, regaling the audience with anecdotes from his early days on the road with Barsalona.

But before all the tributes started, both Bono and Bruce participated in the live auction conducted by industry guru Michael Klenfner and Howard Stern’s radio producer Gary Dell’Abate. Each rocker snatched up a record from Barsalona’s famous collection of vinyl records. Bono got Dr. Hook and the Medicine Show’s first album, with the seminal hit “Sylvia’s Mother.” Springsteen picked up the equally famous and out of print rare 1971 debut album by Sir Lord Baltimore, a cult New York band. Bruce will have no trouble tripling his investment with any rare record dealer.

So, more to the point, is Bono a fan of Dr. Hook? “Absolutely,” the Irish rocker told me. Any chance of U2 covering a Dr. Hook song, I wondered? “Absolutely not,” he replied. “Our sexuality is too well defined for that.”

Bono was not satisfied with his Dr. Hook purchase, however. He is trying to persuade music publisher Allen Klein — who controls the rights to songs by the Rolling Stones and Sam Cooke, and who once represented John and Yoko in their split from the Beatles — to sell him George Harrison’s Gretsch guitar from the Traveling Wilburys. Klein bought the guitar, which was designed by Harrison, at the auction for less than $5,000 — and it’s signed by Harrison, Bob Dylan, Roy Orbison, and Tom Petty.

Bruce, however, was very happy. ‘My first manager also managed Sir Lord Baltimore,” he told me. “I had to have it.”

Springsteen listened with interest as the evening’s show unfurled and featured a show-stopping comedy performance by Van Zandt. In addition to being a founding member of Bruce’s band, Van Zandt also plays Silvio, Tony Soprano’s loyal assistant on the HBO hit series, The Sopranos. Even though Van Zandt had spent the bulk of the evening eating dinner with his usual babushka on his head and gypsy-type couture, when he appeared on stage he was Silvio from head to toe. He even wore Silvio’s waxed pompadour and electric purple satin shirt.

As Silvio, Van Zandt welcomed the heads of various record companies as if he were the Godfather acknowledging the heads of various crime families. He decried current pop music — “everything since Dion is bullshit” — and reminded the execs that without Barsalona they each would have become “bookies, pimps, numbers runners, and pimps. With the exception of [famed rock promoter] Ron Delsener, who would have been a male prostitute on Queens Boulevard.

Bono — who has never been accused of having a sense of humor — recalled that his father warned him when he came to America with U2: “Watch out for the Italians. They do stuff. They’ll hug you.” The U2 singer said indeed Barsalona’s blatant emotions were “a little off-putting for an Irishman who’d only had a handshake from his own father. To have Frank kiss you all over…” He thanked Barsalona for proving his father wrong.

Bono also conceded he’d made a mistake leaving Barsalona for U2’s Pop Tour, realizing later that the promoter’s criticism of the group’s prior Zoo TV tour had been correct.

But it was Springsteen who put Barsalona’s influence and contributions to the history of rock ‘n’ roll in perspective. In 1976, he recalled, his band was going through a bad time. “The IRS had taken an interest in us. We’d never paid taxes in our lives. We’re from New Jersey. It’s part of the glory of living in the state!”

Barsalona loaned the group the $100,000 they needed to pay their debts, and put them on the road in profitable concerts around the world. “Frank saved our asses,” Bruce said, “and he invented the touring business.”

Another Barsalona client, Peter Wolf, came down from Boston to see his old friend. He told me his long-awaited new album, which features Keith Richards on several tracks, will be released in May on Artemis Records. Some other notables at the Nordoff Robbins dinner included Atlantic Records co-founder Ahmet Ertegun, singer Phoebe Snow, and Saturday Night Live cartoonist Robert Smigel.