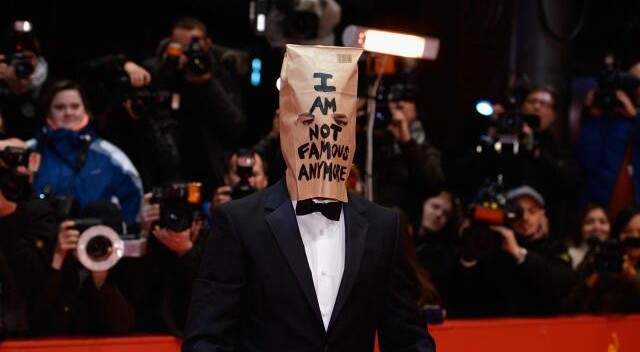 PAULA SCHWARTZ reports: Neither Shia LaBeouf nor director Lars von Trier showed up for the premiere of  “Nymphomaniac” Thursday night at MoMA, where the enthusiastic crowd cheered and laughed at all the right moments. As far as I could see there were no walkouts.

Star Uma Thurman was there but refused to speak to the press. It’s too bad, because she has a wonderful scene, probably the best in the movie, and it doesn’t involve sex or taking her clothes off.

“Nymphomaniac” however is full of sex scenes. And even though the film comes with warnings that stunt doubles were used, sometimes they weren’t. For example, actor Stellan Skarsgard broke some news last night. In Part 2 of the movie, which we haven’t seen yet: “The penis at the end, that is Lars von Trier’s.”

Got that? Von Trier wisely took a vow of silence after he was banned at the Cannes Film Festival for saying “I’m a Nazi” and “Israelis are a pain in the ass” at the press conference for “Melancholia” in 2011. Anyway, the director, who lives in Denmark, famously doesn’t take planes.

As for LaBeouf: he turned up at the Berlin premiere of “Nymphomaniac” with a bag over his head that read, “I am not famous anymore,” nobody expected LaBeouf to do press for the film in New York. Also the last few minutes of “Nymphomanic” ( a two part movie)  are a graphic sex scene with LaBeouf (performed with stunt doubles). It’s hard to imagine having a discussion with him about this over cocktails and pigs in the blanket.

The stars who did show up for the New York premiere, included Skarsgard (now known as the father of Alexander Skarsgard from “True Blood”) and Charlotte Gainsbourg, longtime von Trier collaborators, along with Stacy Martin, who is making her movie debut, and Christian Slater and  Thurman, who worked with the controversial director for the first time.

Gainsbourg plays Joe, a self-described nymphomaniac. Skarsgard portrays Seligman, who discovers a badly beaten Joe (Charlotte Gainsbourg) in an alley and takes her home to take care of her. (Martin plays Joe as a younger woman.) While she’s recovering, Joe tells Seligman her sexual history, which he interrupts to offer his unsolicited opinions, like how the hunt for sex reminds him of fly-fishing. Joe, an emotionally distant bachelor, may have Aspergers.

Gainsbourg, who worked with von Trier on “Melancholia” and “Antichrist,” told me of von Trier,  “I feel close to him, but he’s still very mysterious and I enjoy the fact that I don’t know that much about him.”

I asked Skarsgard his first impressions of the script and comparisons of sex to fly-fishing?

“I laughed loud. It’s such a pitiful man I’m playing. He’s got no relationship to real life so when she talks about very odd sexual experiences the only thing he can relate to is fly fishing and that’s kind of pathetic.”

The “Mamma Mia” actor has made six movies with von Trier, who he called a good friend and collaborator. “It’s great fun all the time and even if it’s very dark material sometimes or difficult scenes you do it with a lot of humor and generosity from his side. He’s very open to everything.”

Christian Slater told me he flew to Cologne, Germany to meet with the director about his role as Joe’s father. The characters have more than a fleeting sexual attraction.

“We just sat down and he shared a lot of personal stories about his life, his points of views on things. I was so taken aback by how sweet and humble he was that I loved him from that first dinner and really wanted to do anything I could possibly do for him to help him achieve the film that he was trying to make.”

As for whether the film’s title gave him second thoughts, Slater said, “At first I wasn’t sure if I heard it correctly but, look, then I thought it was intriguing and provocative and, you know, I was really happy when I saw the movie for the first time in Berlin because I didn’t know what to expect,” Slater said. “But I got very emotionally invested in the movie and in the girl’s story. I just thought it was so amazing so by the end I felt a great deal of compassion and love for her, so he did a great job.”

On the red carpet, I jokingly asked Martin, gorgeous in a black Prada gown, if she couldn’t find a more difficult first film to make.

“The character I play, Joe, is so different from who I am and it was an incredible privilege to work with Lars on a first film and you can’t say no. If it’s your first film and it’s a Lars von Trier film and you’re a fan of his work you have to say yes>”

Martin, 22, who was in school when she auditioned for the “Nymphomaniac” told me she had no qualms about getting naked, or the sex scenes, which are explicit.

At the very end of the film, there’s the disclaimer, “None of the actors had penetrative sexual intercourse.” The credits also list the names of the stunt doubles.

Later at the after party at Butter I asked Martin if she always realized how funny the script was?

“Lars’s humor really comes out but then when we were filming it we laughed out loud,” Martin said. “He doesn’t make it that obvious and that’s what makes it even funnier is that initially you take the scene as something quite dramatic, especially the Uma Thurman scene and then you watch and the humor comes out and it is funny and you feel so guilty for laughing and that makes you giggle even more so you’re in this ever ebbing circle.”

At the after party I asked Stellan Skarsgard, who mingled with everyone, about his character Seligman, who describes himself as a secular Jew who has a Jewish grandfather and has  “sentimental regards” for his Jewish roots. The character added. “We’ve always been anti-Zionist, which is not the same as being anti-Semitic.”

These exchanges bring to mind von Trier’s Cannes press conference and his comments about Israel. I asked Skarsgard why von Trier made his character Jewish?

“Both our characters are parts of Lars and he grew up Jewish,” Skarsgard said. “He thought he was Jewish until he was 30 when his mother told him that the guy you think is your father is not your father. It was his mother’s boss, who was German.”

He insisted that von Trier was not anti-Semitic. “And he’s not a Nazi. That was something drummed up by the press.” Skarsgard insisted even now von Trier regards himself to have Jewish roots.

As for Seligman saying he is anti-Zionist, Skarsgard said of the director, “He does not approve of some of the policies of the State of Israel, which I don’t either. I’m not an avid Lieberman (fan) you know. I’m not a Netanyahu fan. I like Shimon Peres.”

He added, “So Israel as you know is there’s a lot of opinions and you don’t have to agree with all of them.”

After a few selfies and handshakes with fans, Skarsgard returned to the discussion of sex in “Nymphomaniac.” “Wait until you see the 5 ½ hour version,” he said. “After a while a penis entering an orifice is as natural as food entering your mouth.”

But it’s not a very romantic concept I said.

“Not very romantic but it’s what life is like. I mean we all do it, C’mon! We all do it so what’s the big deal?”