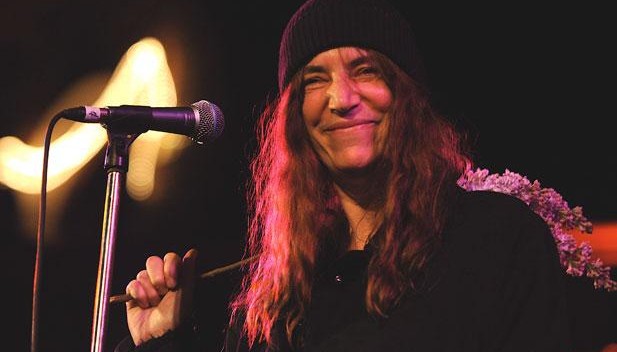 EXCLUSIVE: The great (I mean it, I love her) Patti Smith is always called “the godmother of punk rock.” But now I can tell you that Patti is a real grandmother. Her son, Jackson, has a baby boy born last November 4th.

Patti was beaming as she told me about the bundle of joy, who is named for Jackson’s late father, and Patti’s late husband, the great MC5 rocker Fred “Sonic” Smith.

We were at a swell little private screening last night of Jim Jarmusch’s new movie “Only Lovers Left Alive” starring Tilda Swinton, Tom Hiddleston, and Mia Wasikowska. More on that a minute.

Patti told me she’s been pretty busy lately. She wrote and recorded a song for the “Noah” soundtrack. “It’s a lullaby song in the movie by Noah [Russell Crowe],” she said. She’s also working on a follow up book to her mesmerizing best selling memoir, “Just Kids.”

Meantime, at the “Only Lovers” screening (sponsored by W Magazine and editor Stefano Tonchi) came a slew of indie film types including the blonde and beauteous Oscar winning Tilda, plus the Talking Heads’ David Byrne, actors Stellan Skarsgard and Peter Sarsgaard (who are not related to each other), Joel Coen, Steve Buscemi and wife Jo, Fisher Stevens and Lexi Bloom, Pablo Schreiber, and Ann Dexter Jones.

The modern vampire story– quite different from “Twilight” — has an official premiere on April 1st and will be released by Sony Pictures Classics that week. It’s Jarmusch’s first real move since the excellent “Broken Flowers” in 2005.