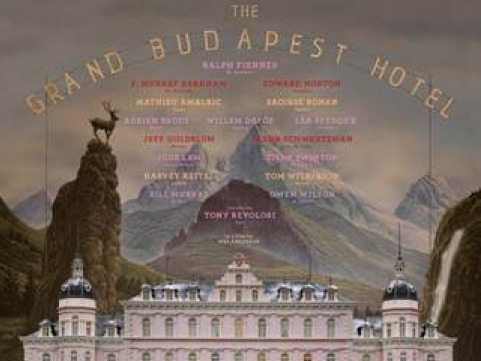 It’s Tuesday morning. In a few hours we’ll get the box office number from last night. Since Friday, Wes Anderson’s gem of a film, “The Grand Budapest Hotel,” has made over $1 million in four theatres in two cities. Last night the fable set in Eastern Europe between the world wars was sold out at every show at the Union Square Regal in New York. I know because when I was shut out of the 8:10, my friends and I took the 9pm. And that was sold out seconds later.

What’s going on here? “GBH” opened a few days after the 2013 Oscar movies were completely spent. Most of them were gone from the theaters, and the ones that remained– people were tired of hearing about them. I left the Oscars and said “If I hear the word Gravity once more, I’ll scream.” Apparently the public felt that way, too. With no good films since January 1st, at the end of a freezing and horrible winter, “GBH” telegraphed itself to an upscale audience as something it wanted to see.

This is just in New York and L.A. so far. Just watch as Anderson’s masterful work of art rolls out to major markets. Capitalizing on the tones of  “The Fantastic Mr. Fox” and “Moonrise Kingdom,” Anderson adapts the work of forgotten Austrian Jewish writer Stefan Zweig and brings to life a little bit of himself with his own characters. Anderson, stirring the pot for color, then adds his own repertory company as bits of spice: everyone from Bill Murray to Jason Schwarzman to Owen Wilson, Bob Balaban, and Edward Norton.

“GBH” is part satire of Kafka as well as a survey of Zweig. I used to say Wes Anderson wanted to be (like Dr. Tim Watley of “Seinfeld”) Jewish for the jokes. “GBH” is as much a nod to Woody Allen’s “Love and Death.” In real life Zweig left Germany and Austria for Brazil, where he and his wife committed suicide. He was rabidly anti- Nazi. Anderson has filmed “GBH” mostly in Saxony, Germany near Dresden, where there was a concentration camp in the early 1930s at Hainewald. Filming in a local castle and an original department store, Anderson makes his Grand Budapest Hotel very real, maybe too real.

Anyway. “GBH” is a brilliant fable, and one which will meet us in the fall for many awards nominations. We can just enjoy it until then as a great work that is selling tickets based on word of mouth and no other persuasive tactics.  I’ll bet a lot people are already going back to study it again.