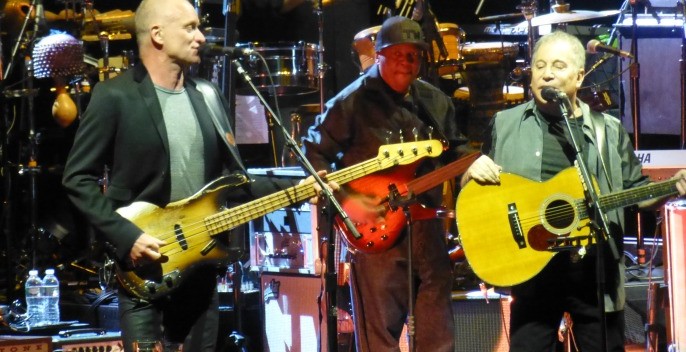 I’ll start with this: Art Garfunkel has nothing to worry about. Paul Simon is not cheating on him. But he is performing a short concert tour with Sting that works better than I ever would have imagined. They come from different generations, but Simon and Sting have a lot in common. What unifies them is a love of jazz, a basic  rich musicality, and a gift for storytelling in their lyrics that is not heard anymore.

The two and a half hour show has no intermission. You don’t want one. Both bands are on the stage most of the night at Madison Square Garden, meaning, as Sting told me the other day, “there are more musicians on stage than the New York Philharmonic.”

Ironically, Sting and Simon lived in the same building on Central Park West for a long time. They never thought of playing together. I’d never think of it either. Simon’s heyday of the soft rock singer songwriter was ebbing in 1977 when The Police rode in on Britain’s post punk New Wave. “Roxanne” quickly replaced “Cecilia.” Simon said he was still crazy after all these years. New wavers actually were crazy.

Indeed, Simon had a fallow period in the early 80s with “One Trick Pony” and “Hearts and Bones,” while Sting and the Police charged by them with the Clash, the Jam, the Pretenders, and Elvis Costello. Paul Simon seemed so out of it until “Graceland”  brought him back in the mid 80s. Both artists have also experimented widely with Third World music and other new influences rather than repeat themselves.

Now together, surprisingly, Simon and Sting segue in and out of each other’s songs effortlessly. Simon joins in on “Fields of Gold” and “Fragile.” (Simon said of the latter, “I love that song. I always wanted to sing it.”)  Sting literally remakes Simon’s  “America.” He explains how The Police first traveled across this country in a station wagon playing gigs in terrible places; he infuses the song with a memory of that journey. Sting also makes “Bridge Over Troubled Water” soar almost Garfunkel-like. (Simon’s voice wavers only here. He wrote one of the three or four best ballads in pop history but it’s beyond his range.)

The second show in NY is on Thursday night, then the tour moves on. Get in there to hear them do a countrified “The Boxer” together almost like Simon does it on Jerry Douglas’s album with Mumford and Sons. And to hear Sting revive, at last, one of my favorites of his solo numbers, “They Dance Alone.” It’s about Chile and Pinochet but it could easily be directed to the Ukraine or Venezuela.

Each artist has enough songs for four hours or more. Simon leaves out “Mrs. Robinson” and “The Sound of Silence.” I wish they added “Loves Me Like a Rock.” Sting could slip in “If Ever I Lose My Faith in You” or “When You Dance.” The whole thing could go on all night. As it is, they conclude on neutral ground: the Everly Brothers’ “When Will I Be Loved.” Simon says, “It all began with two guitars and a microphone. That’s the way it should end.”

Sting is clearly enjoying Simon’s tutelage. He joked after the show last night that Simon, who’s his senior by exactly a decade, had re-arranged all his songs. “He’s the Jewish grandmother I never had,” Sting quipped.

Something tells me this pairing isn’t done yet.