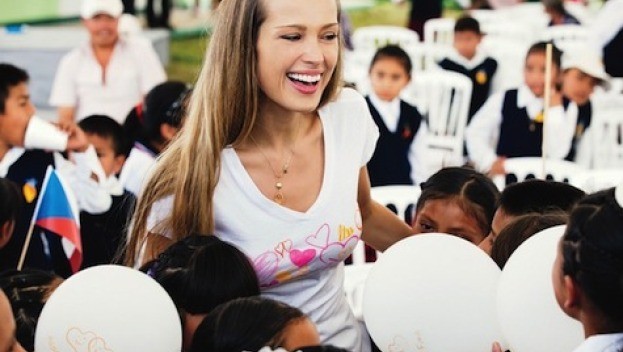 EXCLUSIVE Czech super model Petra Nemcova takes her charities seriously. She told me last night at Charles Finch’s annual Chanel dinner at the great Italian restaurant Madeo in Beverly Hills that she’s living in Haiti full time. And she does mean full time. The great beauty does have places to stay around the world when she goes on shoots. But she said she’s got a decent house in Haiti.

“Don’t worry, I’m not living in a tent,” she assured me. She is however building schools and getting money to Haiti businesses who are still in a massive rebuilding effort after the 2010 earthquake. Her charity is called the Happy Hearts Fund. Nemcova was propelled into this work after nearly being killed in the 2004 Indian Ocean tsunami that took the life of her fiancee, Simon Atlee.

Finch’s dinner, like Harvey Weinstein’s, was a direct rebuke to the celebrity rat-fest going on up at the Beverly Hills Hotel for the Motion Picture Fund. Almost no bold faced names pay for those tickets, and everyone gets a photo op as they scoot away with swag under their arms.

Earlier in the evening, up at the Polo Lounge at the Beverly Hills Hotel — the MPTF is curtained off from the rest of the hotel– I bumped into “Wolf of Wall Street” director Martin Scorsese, ebullieny as usual, with his wife Helen, his three daughters, son inlaw, and new baby granddaughter Sarafina. And on a collision course: Meryl Streep, husband Don Gummer and their actress daughter Mamie Gummer.