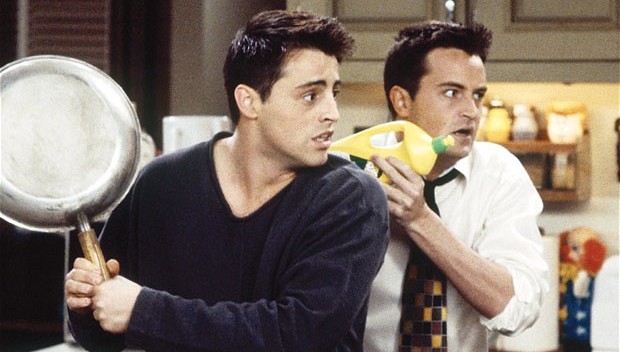 The search is on for someone to play Oscar Madison in the new TV version of “The Odd Couple.” Matthew Perry is signed to take fussy Felix Unger already. Perry has already played a sort of Tony Randall type character in the movie “Down by Love” with a Rock Hudson-esque Ewan McGregor and a Doris Day-ish Renee Zellweger.

But if Perry is Felix, shouldn’t Matt LeBlanc be messy, clueless Oscar Madison? The answer is yes. The pair were already playing those characters sharing an apartment on “Friends.” This seems to be a no-brainer.

LeBlanc is signed to Showtime’s “Episodes,” for which he’s been nominated for several awards.

But guess what? Showtime and CBS– the new network taking over “The Odd Couple” (it ran on ABC from 1970-75)– are owned by Viacom. It wouldn’t be hard to make that work out.

A casting call has gone out for Oscar, as well as his assistant (played on TV by Penny Marshall), and the famous Pigeon sisters. In the original “Odd Couple,” the sisters were Brits and kind of daffy, not bimbos. Think Jane a younger Jane Leeves. Or actually, think Lucy Punch, who would be more than perfect.

The fear of course is that the new show will be blanded out in the same way new versions of great movies (think “The Heartbreak Kid”) that lose all their class and ethnic distinctions. “The Odd Couple” worked because it was distinctively New York. It was also excessively sympathetic. Even the characters fought, they liked each other enormously.

Let’s hope the new producers of “The Odd Couple”– Garry Marshall is not involved– don’t screw this up.