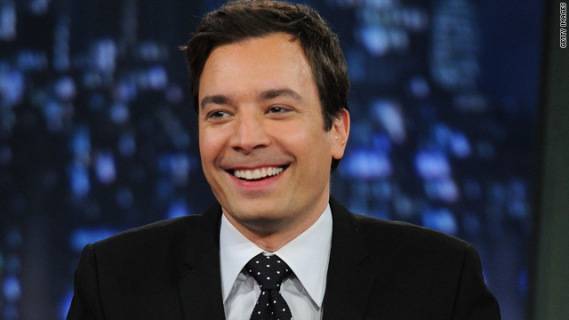 I can’t wait for Jimmy Fallon’s barbershop quartet number to hit You Tube so I can post it here. On the second installment of his “Tonight Show” Fallon hit a home run with that sketch, a very good monologue, and guests Jerry Seinfeld, Kristen Wiig, and Lady Gaga.

I don’t think anyone’s ever seen a new show appear and be instantly relaxed, professional, engaging, and charming so fast. I guess five years of “Late Night” prepared everyone involved, especially Fallon. Night 1 was very good. Night 2 was a hundred times better. It makes you wonder what’s next.

Then Jerry Seinfeld appeared as the show’s first stand up comic. Not only did Seinfeld kill, but he and Fallon had a great couch talk. Fallon imitated Seinfeld, which Jerry clearly loved. And Jay Leno was name checked in a very respectful off the cuff way. What a smart idea: it makes the TV viewer feel comfortable about liking the new Tonight show. I hope Leno can appreciate that.

Kristen Wiig did a hilarious bit coming out as Harry Stiles from the boy band One Direction. She didn’t even attempt an English accent, which made it funnier. And she and Fallon sang a garbled “What Makes You Beautiful.” Fallon’s willingness to jump in and sing or play an instrument is what’s going to make this show stand out every single night. Great bit.

Also, Questlove and another member of the Roots did a straight reading from “The Bachelor.” This is a throwback to Steve Allen reading lyrics of pop songs with a straight face. It works every time!

In this context, Lady Gaga seemed absolutely reasonable. Dressed in white against a white with billowing smoke she performed “Art Pop,” the title track of her latest (and maybe not greatest) album. The song is catchy, and she delivered. What’s more, you could tell the whole performance was LIVE.

Fallon and Seinfeld especially had that harken back to Steve Allen feel, even a little Letterman (whom we still love). And Seinfeld’s routine actually made me laugh out loud. He is sharp, sharp, sharp. I liked him calling the wooden set a “rich kid’s chess set.”

Night 2: A plus. Can’t wait for tomorrow night!