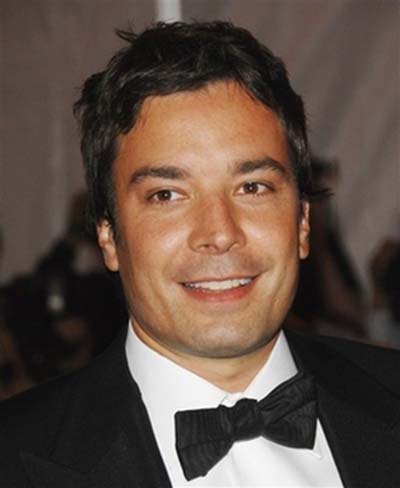 Episode 1 of the Tonight Show with Jimmy Fallon: A plus. U2 not only played on the roof of 30 Rock, but they also performed their Oscar nominated “Ordinary Love” acoustic, unplugged on Jimmy’s couch.

There was also a parade of celebrities who delivered $100 bills to Jimmy. The joke was it was a payoff on a bet that he’d never host the Tonight Show. One by the one they marched out, starting with Robert DeNiro and including Joan Rivers, Mariah Carey, Lady Gaga, Seth Rogen, Lindsay Lohan, Kim Kardashian, Tracey Morgan, Tina Fey, Rudy Giuliani, Mike Tyson, Joe Namath, Sarah Jessica Parker– who had her money in a designer shoe, and Stephen Colbert.

It was Colbert who yelled, “Welcome to 11:30, bitch!” He poured $100 in change onto Fallon’s lap. But he also poured it into a space in Fallon’s shirt collar. It was all very real. When the show over, Jimmy was still shaking coins out of his clothes. A shiny new penny fell out of his pants leg backstage while he talked to guests after the show.

“My lucky penny!” he said. “I knew it was trouble when he went for the shirt,” Fallon said, laughing. “I’ll be finding change all night!”

The guests were a surprise to everyone in the audience. We were asked not to divulge names or Tweet about any of it. And we stuck to it.

U2 sang live on both songs, by the way. On the roof, they had to re-do “Invisible” after a technical glitch. I’ve been on that roof. It’s very narrow, cold, and windy. They were troupers.

Production sources say the acoustic performance may become a signature of the show. Music acts will really have to bring the real deal to the Tonight Show. No lip synching or other fudging.

Watching the finished version just now on the east coast, I’m still impressed about how smoothly it all went. Jimmy Fallon, sixth host ever of The Tonight Show, is on his way.