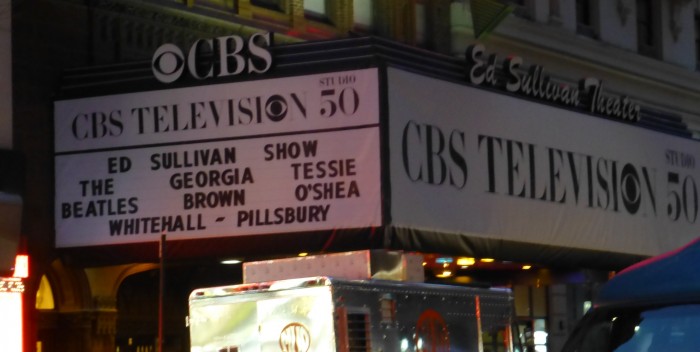 And so we close Beatles weekend– first with a great event at the Ed Sullivan Theater, a panel discussion for CBS online moderated by Anthony Mason with The Rascals’ Felix Cavaliere,  Foreigner’s Mick Jones, producer Peter Asher, Pattie Boyd Harrison, The Rutles’  Neil Innes, “Across the Universe’ director Julie Taymor, John Oates of Hall &, and new 5 time Grammy winner Nile Rodgers. Ed Sullivan’s granddaughters were in the audience as was his publicist, Bernie Ilson, who wrote the memoir “Sundays with Sullivan.”

They even put up a facsimile of the marquee from the night the Beatles debuted on Sullivan! Nice touch!

The 90 minute show was the first in a series for CBS.com. What better way to kick it off? After the show, the audience– which included CBS radio prize winners– was invited to stay and watch the Beatles special on the big screen in the theater. It was a little surreal. When I was in first grade watching the Beatles 50 years ago, I couldn’t have imagined that I’d be in the same theater, etc. It was a grand night. Martin Lewis even convinced Neil Innes to sing a Rutles song. And everyone sang “All You Need is Love” at the end, with Innes, Jones, and Oates on guitar.

I came home to the DVR of the special. The good news is that it ran mostly as we saw it in the L.A. Convention Center. The only song I think they omitted was Paul and his band on “Magical Mystery Tour.” There wasn’t time. Everything else was intact. Producer Ken Ehrlich did a good job presenting what the amazing show that we saw in that room.

A couple of thoughts: you can see it on the special and from the Grammys, which were held the night before across the street at the Staples Center. The Beatles family– Paul, Ringo, Yoko, Olivia, Sean, Dhani, Ringo’s wife Barbara, her sister Marjorie (who’s married to Joe Walsh) — were what made the two nights so pleasant. They were front and center, invested in the moment.

They sing along to the songs, dance. They’re not faking it. You watch them all mouthing the words to the songs. Sean Lennon even video’s the finale from his phone. Dhani Harrison does his father proud playing and singing on “Here Comes the Sun.” Even Yoko is having a good time. Old feuds are put aside. At the Grammy show, the whole gang sat right up front and were present for the whole show. It was refreshing.

Second: the songs are stunning, aren’t they? I thought I could fast forward through them. But it was impossible. I was very impressed a second time around with Keith Urban and John Mayer on “Don’t Let Me Down.” Annie Lennox is phenomenal singing “Fool on the Hill.” I really loved John Legend and Alicia Keys on “Let it Be.” My only real gripe: not enough John Lennon songs. But Ed Sheeran gave a terrific reading of “In My Life.”

Were the ratings good? Against the Olympics and “Downton Abbey”– who knows? If you loved music you watched the show. And you saw two and a half hours of live — live– music, no lip synching or Auto Tune, or any of the crap this generation has become so used to. There were live French horns in “Sgt. Pepper”! Musical director Don Was, band members Peter Frampton and Steve Lukather, were all superb. The Renaissance of Joe Walsh is an astonishingly nice thing to watch.

And no, I have no idea why those actors were there. Johnny Depp’s reading was bizarre. But they were like the furniture, really. They didn’t hurt a thing.

Kudos. Loved the interviews with David Letterman, too. Ringo seemed chipper, as usual. Paul actually looked a little dazed. What a thing for them to take in. This Beatles celebration is unprecedented, and it won’t happen again to anyone. They made history, and gave us our culture. Imagine if Shakespeare had been brought in 50 years after his first play, to the Old Globe, for a national celebration of his work. Or Beethoven or Mozart. It has to be a dizzying experience to know you were responsible for all of this.