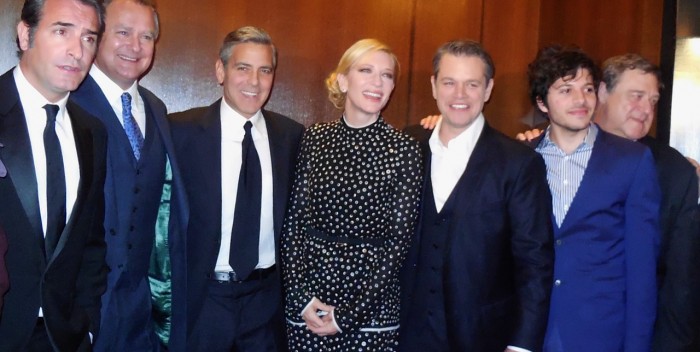 Just before another storm hit New York, it was time for an A list movie premiere. George Clooney hit town last night at the Ziegfeld with “Monuments Men,” followed by Columbia Pictures’ swanky party at the Metropolitan Club. The whole cast did the night, although Cate Blanchett skipped the soiree lest some new wanker blame her for Woody Allen’s family problems. The poor woman!

Clooney was accompanied by his parents, the affable Nick and Nina, not to mention his singer god-daughter Nora Sagal, niece of Katy Sagal. Nora entertained with her band in one of the rooms at the Metropolitan Club. She also has a featured singing spot in the movie.

I also ran into an old friend– the delightful actor and writer Malachy McCourt (his brother was Frank McCourt, author of “Angela’s Ashes”). McCourt’s wife’s cousin is the widow of one of the real Monuments Men, who saved all the European art from the Nazis.

Bill Murray posed with some West Point cadets who came down for the screening. Women flocked to George as if he were wearing catnip. Jean DuJardin, Best Actor two years ago for “The Artist,” proved he can speak in English and also dazzle the ladies. Clooney had some long chats with Cuaron (remember, George is in “Gravity”). The Metropolitan Club was bursting and bubbling.

Best story of the night happened in the theater. Regis, in form, walked right down the aisle at the Ziegfeld and plopped down in the wrong seats. They belonged to Graydon Carter and his wife Anna. “I don’t know, someone put me here,” said Reege, as if gathering material for the next morning’s show. Joy looked exasperated. Finally, ushers were deployed to figure it all out.

Quipped Graydon with perfect comic timing: “I often come into my office in the morning, and there he is, sitting there.”