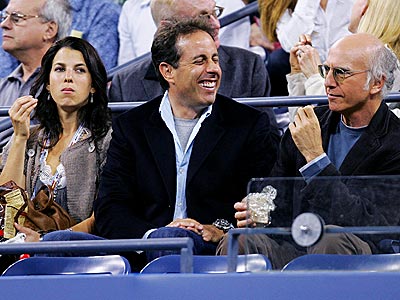 So this was the “Seinfeld” reunion, the mystery shoot at Tom’s Restaurant on the Upper West Side with Jerry Seinfeld, Jason Alexander, Larry David and Wayne Knight. The word is that this was not a commercial, and no money changed hands. But someone paid for this meeting of the fictional Jerry, George Costanza, and Newman. Maybe it was Acura, which sponsors Jerry’s trenchant “Comedians in Cars Getting Coffee.”

In a statement, Jerry said: “Fox approached (Seinfeld co-creator) Larry (David) and me about doing some kind of Seinfeld reunion for the halftime broadcast because of the New York connection,” he said. “So we thought throwing Jerry, George and Newman into a Comedians in Cars Getting Coffee was a fun way to do it. Larry and I wrote the script in one sitting, just like old times, and working with him, Jason and Wayne was a total blast as it always was.

Where were Elaine and Kramer? The easy answer is: on the West Coast. A couple of weeks ago I was in Los Angeles at the SAG Awards. Someone asked Julia Louis Dreyfus about the Tom’s Restaurant shoot. She actually looked surprised. But of course, she’s a multiple award winner for Best Actress.

Anyway, the “Over Cheer” is very funny. Jerry, George, and Newman just fall back into their old roles like no time has passed. The return to Monk’s is only spoiler by the fact that now they’re using Tom’s as the actual place where they meet. In the old days, the real diner was the Trio on Columbus and 82nd St. But the Trio was represented on “Seinfeld” by Tom’s because of their sign– and then fiction became reality.

From Crackle: George Costanza: The Over-Cheer