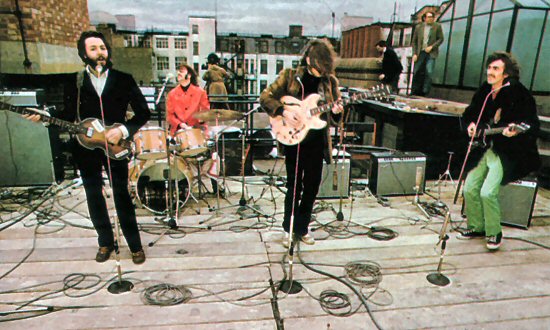 January 30, 1969– today is the 45th anniversary of the Beatles’ famous ‘rooftop concert’– their final performance together. The concert, so to speak, happened on the roof of Apple Records at 3 Savile Row in London. It was a surprise show and it lasted 42 minutes until the London police shut it down. You used to be able to see all of it in the “Let it Be” movie, which has never been released on video tape or DVD. Apple’s Jonathan Clyde told me over last weekend that “Let it Be” will be released one day, but that it’s “taking time.”

The rooftop concert was notable also because the only keyboard player was Billy Preston. Paul, John and George all played guitars. Ringo was on drums. On the five tracks — “One after 909,” “Dig a Pony,” “I’ve Got a Feeling,” “Two of Us”– it was only Billy on keyboards. He also famously played on “Get Back.” On the single and the album Billy was credited — so it was “The Beatles with Billy Preston.” That’s the only time in the Beatles history that another musician was identified on their record.

It’s unclear if Billy was ever paid for his work at the time. But he was a clear presence on both “Abbey Road” and “Let it Be,” playing organ and keyboards.