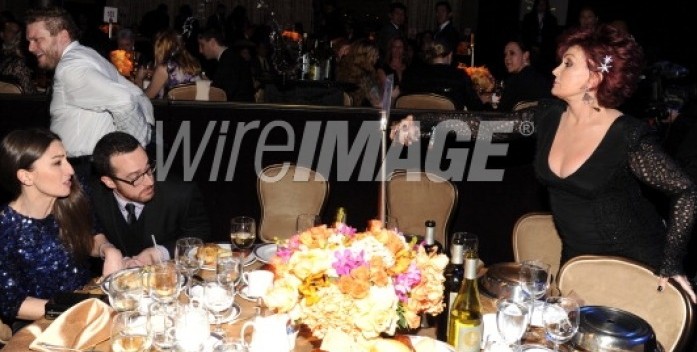 Crazy, crazy, crazy. While Jonah Hill was hosting “Saturday Night Live” last night in New York, his brother Jordan was getting obnoxious and into a fight in Hollywood. Jordan Feldstein wasn’t at his table at Clive Davis’s pre-Grammy dinner last for very long before he got into  a fight with feisty Sharon Osbourne.

According to onlookers, Feldstein said something nasty to Sharon about her son Jack, recently married and diagnosed with MS. Sharon does not suffer fools gladly. She threw a full glass of ice water at Feldstein. That did the trick. He was completely doused. This reporter actually watched as Feldstein waddled quickly away from the table and out the door. His shirt was soaked and clinging to his skin. He did not return.

Someone who knew nothing about what had just happened, quipped, “Wow. That guy must be very anxious,” thinking Feldstein was covered in sweat!

Nevertheless the altercation scared table mate Taylor Swift, who’d been sitting a few inches away. She jumped up, too, and asked to be moved. “I’m a little worried there’s going to be a fight,” Taylor said to the head of her record label.

Feldstein, who manages Maroon 5, was recently in the news when he married Clint Eastwood’s 21 year old daughter in Las Vegas with no notice. It’s presumed the marriage was immediately annulled by an angry Eastwood, who won’t be casting Jonah Hill in any movies any time soon. When I asked Jonah about that incident a few weeks ago, he was very smart in his answer. “I don’t know her,” he said. “And I know nothing about it.”

About the attached photo: WireImage photographer Kevin Mazur happened to be shooting just when this happened.