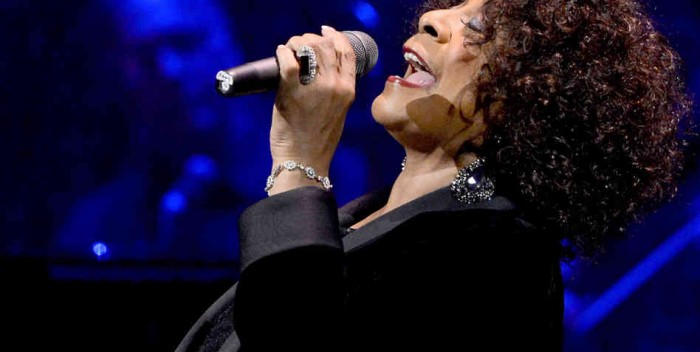 Who did Carole forget? Strangely she omitted Merry Clayton, the famed R&B back up singer. Clayton was in the audience and on the bill. She performed with her co-stars from “20 Feet to Stardom,” Darlene Love, Lisa Fischer, and Judith Hill.

Clayton is being touted right now for her work on the Rolling Stones record “Gimme Shelter.” But after she made that record in 1969, Clayton sang back up prominently on King’s “Tapestry” and “Music” albums. She gave those records their R&B gospel feel. Clayton released three albums of her own on Adler’s Ode label. One of the albums had four Carole King songs. She had a hit with King’s “Oh No Not My Baby.” King played piano on the record!

And yet, King didn’t mention Clayton at all, or even give her a nod for performing on the show. So weird. As far as I could tell, Clayton sat all night with the “20 Feet to Stardom” crowd. There was no interaction with King’s table. Maybe she and Clayton saw each other backstage. But for the 1,000 people in the audience they’d never know that one of last night’s performers helped King get the sound that made her own two best selling albums all time hits.

Seems Clayton, as per King, remains 20 feet from stardom still!