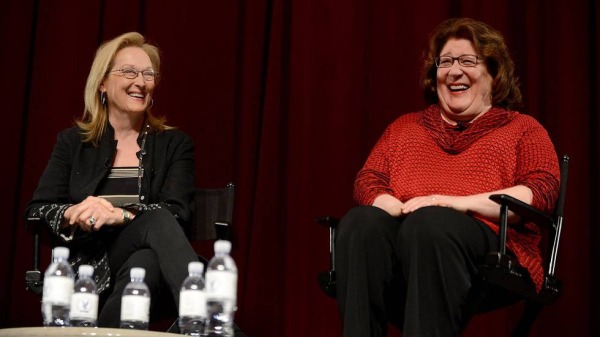 At Sunday night’s Q&A for “August: Osage County at the DGA in West Hollywood–who had the first question but cast member Margo Martindale, who plays Mattie Fae, sister to Meryl Streep’s Violet Weston in the wickedly funny and poignantly sad film version of the acclaimed play.

Margo said, “I always wanted to know how Meryl prepared for the role before she got there.” Streep quipped, “I tried to lose weight, which is what I always do.”  Margo volleyed back, “That’s not good enough!”

This got a lot of laughs, especially from Harvey Weinstein, who was in the audience. The “AOC” is nominated for Best Ensemble at the SAG Awards, and you can see they are still enjoying being a family. At the Q&A, Streep and Martindale even sang their own version of “I’m Just a Girl Who Can’t Say No.”

Streep made the point that they all basically lived together in a small community when on set.  She explained, “I felt like, especially, that me and Margo had to feel like sisters.  It’s important to know get to know everybody’s rhythms and worries. So I said, why don’t we all live together?  This went over real big with some members of the production that needed convincing, but it all worked out.  I wound up knowing everything about Margo and Abigail… thin walls.”

Margo then added, “Meryl even cooked for all of us.”   Meryl replied, “Yeah, I cook in quantity, not quality.”  Margo then said to the crowd, “Look, she’s a fabulous cook, are you surprised?”

Meryl said about filming in Oklahoma, “It was the election time so we were all constantly screaming at the TV, to Margo quipped, “yeah and don’t forget, we were in Oklahoma…” the crowd gave an appreciative applause to that one.  Meryl explained she felt about Violet Weston, the troubled mother of this clan.  “I thought she was kind of great in a certain way. She was madly in love with her husband and he wasn’t with her, she went south after that.  I had great sympathy for her bitter wrecked self.”  Meryl then paused and turned very seriously to the audience and said, “Can we just say how great Margo is?”  The audience agreed.

The now famous dinner scene took three days to film. Meryl: “It’s like the Olympics, but it’s what we actors live for.” Meryl talked about her history with Chris Cooper. “I had a hard time when he was doing the prayer during the dinner scene.  He’s impeccable, his tuning fork is perfect.”

Margo then chimed in: “Chris and I have known each other for 33 years from Louisville.  I wanted to date him then, so it’s great to be married to him now.

Streep said: “My three girls in the film could not be more different. I’m the mother of three girls and they are all so different.  It was interesting for me to be the hot breath of the dragon, scorch the earth and see what children still stood up. I thought it was genius to cast Juliette Lewis because she’s the broken doll version of Julia Roberts.  Julianne Nicholson is the anchor and just brilliant.”

Margo added that Dermot Mulroney was the funniest on a very serious set. “We had no time, the actual shoot was not long, so there was no farting around.”

Meryl added, “It was a tough shoot.  We all had some red wine at the end of each day.”  Margo then told the appreciative crowd her favorite line of the film.  “That’s easy,” Margo, said with gusto it is, “It’s a bullshit,” a line that Meryl knocks out of the park. Margo then repeated it to great comic affect many times over. Let’s hope during awards season these fantastic gals get their due.