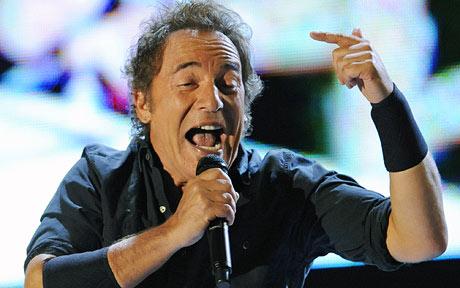 Fans of CBS’s “The Good Wife” are excited because this Sunday’s episode features songs from the new Bruce Springsteen album called “High Hopes.” The whole album is now streaming on CBS.com. But one of them is a little bit out of step for Bruce and for CBS: the really cool rocker “Harry’s Place” features the “F” word not once but twice at about 1:04 and 1:05.

It’s definitely a first for the Tiffany network. It may be a first for Bruce, too, as I don’t recall that word turning up in his songs. Anyway, “High Hopes” is ok, it’s what they call a contract album– Springsteen has a $100 million contract with Sony, and something has to be released every year or so. “High Hopes” has cover songs, like the title track, and re-do’s of older Springsteen songs. Even for a “contract album” it’s better than anything else being released this winter. Great song: “Just Like Fire Would.”

You can hear Bruce drop his F bombs here: