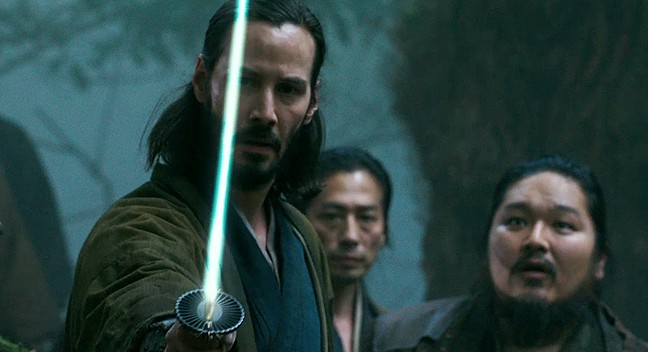 Earlier: Christmas brings gifts for everyone: Martin Scorsese’s brilliant, flawed, and overlong “Wolf of Wall Street” opens today, and Paramount can look forward to a big day. (You know, you could have written the same sentence in 1977 for “New York New York” or in 2003 for “Gangs of New York.” Just FYI.)

Fox is bracing for a lackluster performance from Ben Stiller’s “Secret Life of Walter Mitty.”

But it’s Universal, doing very well with “Anchorman 2,” that must face the music this weekend starting today. The long-in-the tooth “47 Ronin” starring Keanu Reeves has already, according to the great Ron Grover at Reuters, forced the studio to take a write down of at least $175 million. “47 Ronin” is DOA, and joins “The Lone Ranger,” “White House Down,” “The Internship,” “The Counselor” and several other huge financial screen disasters this year.

I feel for Universal. They had Ron Howard’s “Rush,” a great movie, but couldn’t people to rush to it. Now “47 Ronin” will make the audience rush away.

Carl Rinsch, a first timer with a resume in music videos and commercials, directed “47 Ronin.” But the movie was so bad that it was taken away by the studio where it was cut and re-cut. Apparently, that didn’t help. The total bill may have been $225 million.

Why anyone greenlit such an expensive movie with a first time director, an all Japanese cast except for Keanu, is rather mystifying. Reeves needs strong English speaking actors around him for a film to work. This was a recipe for disaster.