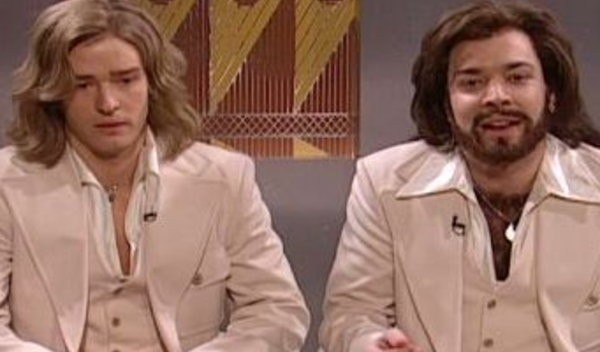 “Saturday Night Live” had plenty of surprises last night, but the most shocking ones were from the Dept. of Aging. Beloved BeeGee Barry Gibb showed up for a singalong with Jimmy Fallon and Justin Timberlake sporting long white hair. In his heyday Barry had carefully coiffed chestnut locks, which Fallon imitates in the segment. Barry is only 67, maybe he should update his look. His falsetto is intact, though, and it was great to see him.

Madonna made an appearance in that segment for absolutely no reason. Dour, dressed in a man’s three piece suit, her hair styled like she was from Staten Island, Madonna was the only one of three visiting pop stars (counting her, Gibb, and Paul McCartney) who didn’t sing. Instead she mumbled some nonsense. And then in the middle of the scene she popped in what looked like braces, a retainer, or possible false teeth. It was very strange. As for the singing, she couldn’t even harmonize with Fallon and Timberlake.

McCartney, of course, remains the class act. He just strolled into Fallon’s opening monologue and knocked off “Have Yourself a Merry Little Christmas.” That was lovely.

Fallon and Timberlake, the musical guest for the night, ruled the show. They’ve become their own Bob Hope and Bing Crosby. Fallon’s energy and his depth of talent is pretty stunning. He’s going to have a very youthful, fun “Tonight” show. Timberlake’s comedy energy and his ability to mimic anyone remains impressive. He still must be wondering why he’s not being coronated on the Grammys this year. Something there really went wrong.

As for Madonna, I just don’t get it.