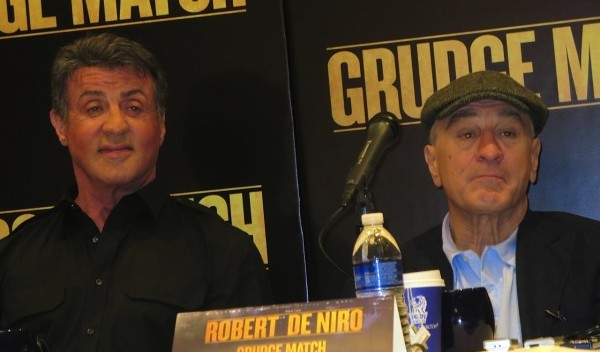 Sylvester Stallone says when he was approached to make “Grudge Match,” a boxing movie with Robert DeNiro, he thought “it was absurd.” At a press conference this week in the snazzy Ritz Carlton Hotel in New York, Stallone–who made “Cop Land” with De Niro in 1997–said: “Nobody wants to see another boxing film, especially when you’re approaching 160 years old.”

De Niro and Stallone play two retired boxers, local Pittsburgh fighters whose heyday was in the early 80’s; they were once fierce opponents with neither box having that last decisive win. De Niro’s character is a sleaze, but a fairly successful businessman (De Niro). Stallone plays a decent but dour guy, who is now a steel worker and low on funds. A fast-talking, unscrupulous boxing promoter (Kevin Hart) coaxes them out of retirement for one last fight.

After he thought about the question of being in the movie, Stallone said DeNiro called him at home. “We talked a lot about it with the studio heads and they convinced me that I was completely wrong.”

For his part, De Niro said, “I liked the idea of us doing it. And so that was it.”

The movie has a lot of poignant things to say about aging and last chances. Was that the draw in making the film?

“Well I’ll start off and you just jump in whenever you want Bob,” Stallone said. “You know what I mean?”

Stallone said, “I thought, oh here we get to prove that you don’t have to be crawling around at a certain age, that you’re obliged to start winding down. It’s kind of like going against trend. Plus, if you still have something to prove, and I think a lot of people as they reach 60 and above, they go, you know what? I have some unfinished business but unfortunately life does not afford you the opportunity to go back and kind of like right the wrong. This is the beauty of fantasy and imagination.”

These characters, Stallone said, have a chance to “correct a moment in their life that will make their life somewhat feel fulfilled. So that’s the fantasy and that’s why I thing the empathy comes in with the audience, and if you can follow that and also look good.”

“And actually, just in the training aspect, Bob, he trained a lot. It was hard,” Stallone said. “Why don’t you tell them about it.”

The production notes say, and the director repeated, that De Niro worked out relentlessly and lost 35 pounds.

De Niro said briefly that he worked out with the same trainer as Stallone has had for the past 10 years, who also happens to be a fighter.

A journalist asked Stallone and De Niro the crazy question of whether they’d trade in their Academy Awards for a legitimate boxing championship.

“It’s a tough sport, tough professionally, and actually being in the ring with a couple professionals I made the right choice,” Stallone said. “No, there’s not a chance because it’s great to be able to interpret it and try to get the feelings. For example, when you meet a Mike Tyson or any of these fellows there’s so much drama going and to be able to play that but then get rid of it and not live with it the whole time because it’s a very heavy, heavy traumatic psyche these guys live,” Stallone said.

“Even though I did say to Bobby, once you’re in the ring, your Oscar is not going to help you in here.”

De Niro laughed, quietly, “I have great respect for fighters because it is what it is. It’s a tough sport and you pay a price. And if you really want to do it you do it. I’m an actor. I’m not a fighter.”

Journalists wanted to know more about their training.

“I couldn’t wait to fight him,” Stallone said, “I’ve been dying since ‘Raging Bull.’ He’s crossed the line. This was extraordinary and he’ll tell you about his aspect of it – in of course in a shorter amount of time.”

Stallone added, “We had to train. This is like if you were casting the lead in ‘The Nutcracker Suite’ or ‘Swan’ ballet and you don’t get to see your lead dancer until the curtain goes up. She was training in Idaho on her own. So what happens? He had to work on the East Coast; I had to work on the West coast. We couldn’t get together. So by the time we got in the ring together I’m going, ‘Oh god, I hope he looks good. I hope he can punch.’ Because we didn’t know, so this was really difficult, usually with Rockies it’s five-six months preparation with the guy. Every day you’re working. We didn’t have that opportunity. That’s why this is pretty extraordinary enough to give him a little credit for his professionalism.”

De Niro’s version: “We had this trainer, as I said, the one Sylvester’s worked with for a long time, and I didn’t lose 35 lbs. I lost maybe 20 or something like that. We worked for a couple of days, and we worked it out. He made it all happen.”

Hart complained, “I was pissed off because I actually worked out and I never got to take my shirt off.”

“That’s true, he was working out every day,” Stallone said.

“That took me for a loop,” Hart whined. “He promised me a semi-nude scene and it didn’t happen at all so I was basically wasting my time with my trainer in North Dakota.”

Alan Arkin, who gets sprung from a nursing home in the film, spends most of his time in a motorized chair. Did that require any training?

“Did I need a trainer?” Arkin asked, incredulous. “I worked with a trainer for months!”

A few beats later, “No, I got in there and I turned the thing on and it went,” Arkin said.

“Really? It was that simple?” Stallone asked Arkin.

“It was that simple.”