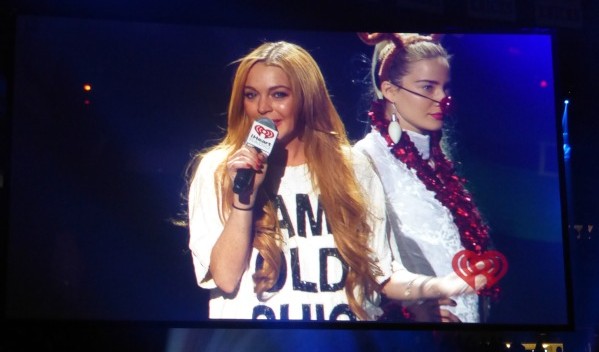 Jingle Ball 2013 at Madison Square Garden: Lindsay Lohan made an appearance on stage and introduced the last act of the four hour concert. Miley Cyrus appeared dressed as Santa with a bare midriff and a bikini bottom, and she danced with a trannie Xmas tree on high heels and a female dwarf wearing silver cone breast plates.

Yes, this was the same Jingle Ball that featured an appearance by R. Kelly, who notably likes young girls. There were plenty in the audience, all shrieking in such a high pitched away that dogs were coming in through the Lincoln Tunnel to see what the commotion was about.

Miley ended an evening that really ran a gamut from the sublime– like the rock group Paramore– to the awful (Bieber wannabe Austin Mahone) to the promising (Arianna Grande).

There was wild enthusiasm for Macklemore and Ryan Lewis, the white hip hoppers, even though I’m still not sure what Ryan Lewis does. Selena Gomez was competent if not exciting. but she did hit her stride on “I Love You Like a Love Song.”

The Jingle Ball is the annual jukebox revue of the year’s biggest hits by the pop stars who made them. If you want to capture the zeitgeist of the preteen in any year, you come to the Jingle Ball. It’s like a giant American Bandstand, and Ryan Seacrest is Dick Clark doing the introductions. Girls shriek. Parents cover their ears. Nothing has ever changed.

Some long in the tooth types are forced into the mix during back room horsetrading. Enrique Iglesias, an enigma, was of little interest to this audience. But there he was, covering the microphone a lot with his fists. It’s unclear how much of his show was live.  R Kelly is old enough to be the father, certainly, of many of the pop acts who surrounded him.

In the audience: Kelly Ripa, who got on the video feed a few times. I ran into Harry Connick Jr, wife Jill Goodacre, and their daughter, in the Food Court. People pay top dollar for these tickets, you know.

Disappointments: my twin 13 year old nieces and their school friend didn’t care much for Robin Thicke. His set seemed rushed, although he smiled a lot. He did a G rated shortened “Blurred Lines” that wasn’t much fun and was lost on the pre-teens.

Jason DeRulo, it was agreed, had good dancers.

Miley Cyrus: despite her year of intended lunacy, she was just great. Miley is a puzzle sorting out its pieces. She does the raunchy thing to be noticed and seem edgy. But she is a dynamite country singer. I think she’s got a huge future that still has not been revealed. When she’s just singing, it’s a pleasure.

If she could get with serious musicians and look at good songs, that’s when Miley Cyrus will transcend. But she’s still pretty entertaining. Her show included a dancing trannie Xmas tree and a female dwarf in a silver outfit with breast cones. Hey, why not? It worked.

There were a lot of pitches for Clear Channel’s I Heart Radio, and some commercials. Meanwhile, newly renovated Madison Square Garden is just a knockout. Wow. I don’t know how they did it. But MSG now is just gorgeous. I don’t think we realized what bad shape it had been in. Congrats to Cablevision and the Dolans.

And thanks to Z100. No one was embarrassingly bad. In fact, for throwaway pop music, the show felt substantial. Fifteen thousand girls liked it. And that’s what counts.