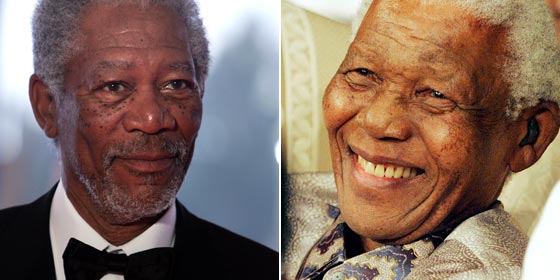 “One of the privileges of making movies is having the opportunity to immortalize those who have made a profound impact on humanity. We count ourselves unspeakably fortunate to have been immersed in Nelson Mandela’s story and legacy. It’s been an honor to have been granted such proximity to a man who will go down as one of history’s greatest freedom fighters and advocates for justice. I have had the privilege of spending time with President Mandela and I can say his sense of humor was as great as his optimism. We are deeply saddened by his loss; our hearts go out to his family and the entire South African nation.”

“What an honor it was to step into the shoes of Nelson Mandela and portray a man who defied odds, broke down barriers, and championed human rights before the eyes of the world. My thoughts and prayers are with his family.”

Morgan Freeman on the passing of Nelson Mandela.

Today the world lost one of the true giants of the past century. Nelson Mandela was a man of incomparable honor, unconquerable strength, and unyielding resolve—a saint to many, a hero to all who treasure liberty, freedom and the dignity of humankind. As we remember his triumphs, let us, in his memory, not just reflect on how far we’ve come, but on how far we have to go. Madiba may no longer be with us, but his journey continues on with me and with all of us.

U2’s Bono remembers Nelson Mandela:
“It was as if he was born to teach the age a lesson in humility, in humour and above all else in patience. In the end, Nelson Mandela showed us how to love rather than hate, not because he had never surrendered to rage or violence, but because he learnt [sic] that love would do a better job. Mandela played with the highest stakes. He put his family, his country, his time, his life on the line, and he won most of these contests. Stubborn til the end for all the right reasons, it felt like he very nearly out stared his maker. Today, finally, he blinked. And some of us cry, knowing our eyes were opened to so much because of him.”

“We have lost our father, an exceptional human being, a hero to the world. There has never been anyone quite like him and there will never be. We should be inspired by his life and celebrate him with our love. We will all miss him dearly. Our love, thoughts and prayers are with Mama Winnie, Mrs Machel, Zenani, Zindzi, Maki and the entire Mandela Family during this difficult time.”