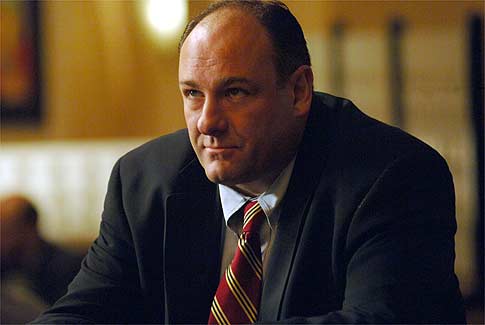 It was emotional night for the family of James Gandolfini. The late actor received a special lifetime achievement honor at the Gotham Awards, presented by his pal Steve Buscemi. Gandolfini’s widow Deborah and his son Michael accepted the award graciously with a brief Thank you. Michael’s mother was present as were Gandolfini’s sisters. They are still in shock a bit, and don’t know what to say to the suggestion that Jim might pick up some awards for his excellent work in “Enough Said.”

After the show, Deborah showed me pictures of baby Lily, who is cute as a button. She told me none of it seems quite real. “I keep expecting him to come through the door, come home,” she told me of Gandolfini, who died this past summer unexpectedly.

The Gotham Awards, held at Cipriani, were even weirder than usual this year. I don’t understand why this show isn’t scripted– and why they can’t hire a decent host. This year it was Nick Kroll, who bombed like every comedian before him in prior years. The audience was so poorly behaved that “The Butler” director Lee Butler launched into a tirade when no one would pay attention to his introduction of honoree Forest Whitaker.

“I began to get angry at white people,” Daniels said in his speech, which got some people to shut up. Whitaker spoke beautifully.

But aside from Daniels’s melt down, the Gothams made no sense. Why was Cate Blanchett in the Best Actress category with a lot of young women from real indie movies? Woody Allen’s Blue Jasmine did not belong in these awards. And why was 12 Years a Slave included? It’s from Fox Searchlight and was nicely funded.

In truth, the movies that did belong– like Fruitvale Station and Short Term 12– got awards. Fruitvale received Breakthrough Director for Ryan Coogler and Breakthrough Actor for Michael B. Jordan. Brie Larson won Best Actress for “Short Term 12.” But that film was otherwise overlooked. Crazy.

And don’t get me started about an appearance by outgoing mayor Mike Bloomberg. His Bloomberg News just laid off 47 writers and killed its art coverage completely. Who’s he fooling? Bloomberg spent Sunday in Bermuda playing golf while four people died in a train derailment in his city. But he made it to Cipriani on time.

Here are the Gotham winners. I have no idea what the audience award means. What audience? And how did all those disparate movies wind up in one category? Thanks to director Mira Nair, who kept me entertained during the evening at our table. And it was nice to run into Isaiah Washington and his wife. He got a raw deal on “Grey’s Anatomy.” I’m glad he’s making a comeback.