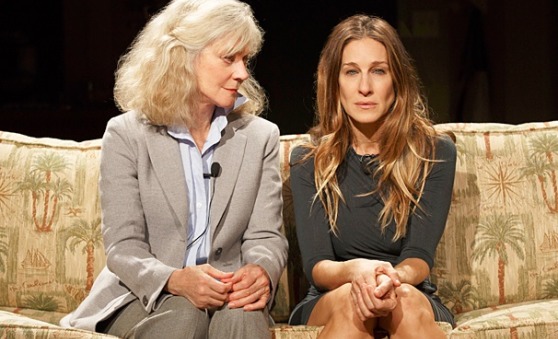 Bernie and Ruth Madoff probably never imagined they’d become the stuff of celebrity drama. First Woody Allen reinvented them for “Blue Jasmine” with Alec Baldwin and Cate Blanchett as their alter egos. Now Blythe Danner is playing Ruth and Sarah Jessica Parker is a kind of Madoff son turned into a daughter off Broadway in “The Commons of Pensacola” which opened last night at Manhattan Theater Club’s smallish City Center Stage 1.

Plus: one our old pals, the great Treat Williams, who’s back in New York and told me: “I want to do plays.” Hello, producers! And two major directors: Joe Mantello and Walter Bobbie.

“The Commons of Pensacola” is a first time ever produced play by Amanda Peet, the actress, who’s no slouch. She’s appeared memorably in “Something’s Gotta Give” and “The Whole Nine Yards,” and in lots of TV shows and even a couple of Neil LaBute plays. So if you add her plus SJP and Blythe Danner you see why MTC’s star director Lynn Meadow directed this production, Santo Loquasto did the sets, and Jason Lyons did the lighting. Santo Loquasto doesn’t usually do sets for first time playwrights.

Something’s gotta give: Under Meadow’s superb direction, Parker and Danner, and the whole cast plays like a Bach chamber group. I don’t think Meadow (who’s won tons of awards) gets enough credit for how she handles these ensemble productions. Last season it was Jessica Hecht (who was in the audience tonight) and Judith Light in “The Assembled Parties.” Meadow knows how to do it and it’s not simple. She just makes it look that way.

The cast is really marvelous. Danner and Parker were on stage together in 1995 in the comedy “Sylvia.” You’ll want to see them now. They crackle with chemistry as mother and daughter. Carrie Bradshaw is long gone from the room; Parker is dead on as Becca, the morally conflicted daughter who’s been ruined by her Madoff father’s crime. Danner is delicious as the Ruth Madoff-ish Judy, who’s been sent to live in a condo in Pensacola, Florida with (almost none) of her former possessions or resources. Did she know what hee husband was doing to his clients? Danner told me “no” at dinner afterwards, but watch Judy and decide for yourself.

“The Commons of Pensacola” isn’t perfect. If it didn’t have all this Hollywood hoopla around it, the play might have gotten its start at Hartford Rep and a couple of other out of town percolators. A lot of the scenes don’t feel “finished,” a common problem these days for new plays that run short (this one’s 88 minutes) and have no intermission. They’re like penultimate drafts. Still, all the ingredients are so good, you can dismiss the infelicities just to see the entirety of the production in an intimate setting.