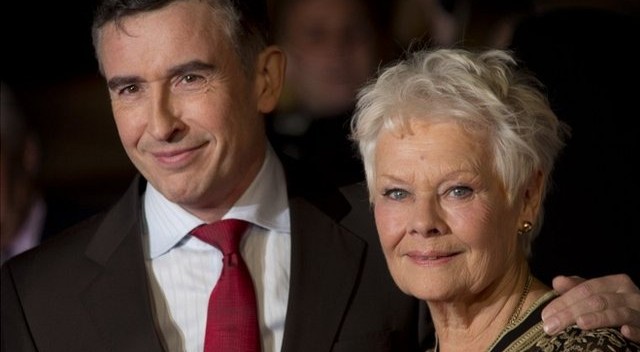 Turns out actor-comedian Steve Coogan, who wrote and starred in “Philomena” (opening today) has some heretofore unspoken of personal experience with the elements of his movie. He was well aware of the laundries in the Irish convent where Philomena Lee was forced to slave away for some three years and where her family sent her to give birth.

“My aunt in England,” Coogan told me after a recent BAFTA Q&A in New York, “voluntarily went to one of these places in the late 1960s, but it was shameful and embarrassing. You went and hide while your belly grew and then had your baby because it was an embarrassment and a huge social stigma to have a child out of wedlock. It seems odd to us in this modern age perhaps but it was very, very real then. I was aware of those places, especially being raised a Catholic, but I knew they were dying out. I was young enough to know when I was 7 or 8 years old, even I was embarrassed that my aunt was unmarried with a baby. It was slightly embarrassing,” he said.

Later Coogan told me his aunt kept her baby.

The real Philomena Lee was on hand that afternoon because the fake one, Dame Judi Dench, has been sidelined in England with some health issues.

“When I told people Judi Dench would play me,” said Philomena, a fragile but feisty lady of nearly 80, who is the subject of the new Weinstein Company film, she tapped her head, indicating everyone thought she was loco.

The talkative and terrific Philomena Lee was at BAFTA screening recently with co-star/producer/co-writer Coogan, and producer Gabrielle Tana.  Tana said Dame Dench was eager to do the movie once she knew Coogan was involved.

“Yes, after her agent told her who I was,” Coogan cracked.

The movie focuses on a road trip Lee took with BBC journalist Martin Sixsmith (Coogan) in 20009 to find her son, who was taken away from her when he was three by Irish nuns at the convent where her family sent her to give birth. The mean nuns gave son to an American family for adoption and as Philomena begins her quest in the film he would have turned 50. (Yesterday the Weinstein Company successfully appealed to the MPAA to reverse an “R” rating to “PG-13.”)

Mrs. Lee, who went on to marry and have children told the BAFTA audience, “I couldn’t believe it when I heard Judi Dench was going to play me.” She added. “I love her as M in the James Bond films. I haven’t seen the last one.”

“Don’t tell her M dies,” Coogan whispered to the audience.

The next day at the film’s junket at the Crosby Hotel, Coogan told me the movie is based on interviews he did with Sixsmith and Philomena Lee, rather than on the book, which deals almost exclusively with the life of the missing son, while he’s hardly in the film.

The “Alan Partridge” actor added, “I didn’t want to make a film that was a polemic film attacking these archaic practices because to me, the benefit of hindsight and some sort of conceited liberal minded admonishment of people in the past is too easy and it needs to go beyond that. That doesn’t really interest me although clearly I’m angry about some of those things. I wanted to tell the story of a single, working class Irish woman. There are many people like Philomena. My mother is a little like her and my grandparents and I’ve known a lot of ladies in Ireland who are her age and I sort of wanted to celebrate that sort of stoic, forgotten women who have sustained their faith and lead quiet, unremarkable but dignified lives.” Coogan went on to say he was a lapsed Catholic.

Much of the humor of film – and there’s plenty of it – comes from comments Philomena makes about sex. How much of a challenge was it not have her come off simple or stupid I asked him?

“You have to be bold sometimes in terms of the way that you write the character to have fun and mock. You can gently mock the character that you then find heroic and then dignify. That’s ok to do that and in fact, you should do that. I want the audience to follow me up with garden path. I want to lead the audience up the garden path. I want them to think that Philomena is a slightly foolish, naive old lady so I can surprise them by showing them her intuitive quality.”

And the comments Dame Dench makes in the film about sex, did Philomena actually say them? Hearing Judi Dench say as Philomena, “I didn’t event know I had a clitoris,” is worth the price of admission.

“She did say that she didn’t know a lot about sex,” he told me, but he also conceded he invented the clitoris quote.

“I thought it would be a quite a shocking thing for her to say. She wasn’t uncomfortable,” about it Coogan said about the real-life Philomena Lee.

“The humor is that Martin is this button down, middle-aged man and his discomfort with it, that did come from the truth. She was very open about it but only because she’s actually unburdened herself. Now she talks forever and can’t shut up because for 50 years, she didn’t say a thing. It’s all boxed up. She’s still talking about it now.”