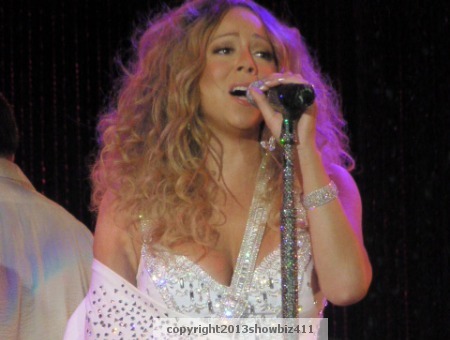 Mariah Carey’s had a weird year. She had a bad time on “American Idol” last winter and spring, fighting with Nikki Minaj and just looking unhappy. She released a single called “#Beautiful” with Miguel that wasn’t really a hit per se but was interesting: it had no bridge, and ended abruptly. She sounded like a guest star on her own record because Miguel sang the opening verses. Very strange.

Then: her album, “The Art of Letting Go,” set for an early July release, was postponed. It wasn’t ready. A new date was set, and then yanked. And that was it. Then while shooting a video, Mariah fell, and really injured herself. She still came and sang at the Major League Baseball event in Central Park. But she was in pain, and wearing sling covers made out of goose feathers and cashmere. I’m paraphrasing.

Last week, Mariah released another enigmatic single. It’s the title track from an album that’s never been released. Frankly, she sings the hell out of “The Art of Letting Go.” She sounds great. The single is a throwback R&B mid tempo number. But it has no chorus. No chorus or hook. It’s a single. In an era of very catchy singles. It’s like “#Beautiful.” Sort of great but half baked.

But “The Art of Letting Go” is at number 116 this morning on iTunes. It’s a dud. No one’s bought it, no one’s playing it. And that’s a bad sign for a new album that still has no release date and is over six months late. Mariah has also had three different managers this year– Randy Jackson, Red Light Management (Dave Matthews firm) and now Jermaine Dupri.