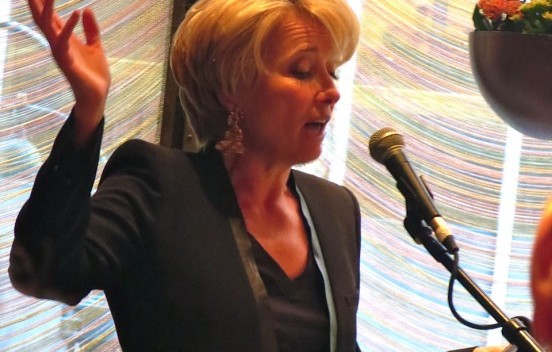 Oscar winner Emma Thompson is not Julie Andrews, and P.L. Travers was not Mary Poppins. At Wednesday afternoon’s lunch time singalong for “Saving Mr. Banks,” Thompson–who plays the very irritable Travers– recalled being in a musical for real. “I once did a musical in London called “Me and My Girl.” It was 15 months, eight shows a week, and I had to be like I appear now, cheerful, onstage. After six months I was clinically depressed.”

“We did a great sing-a-long with Dick Sherman last week in Los Angeles,” she told me. Richard Sherman (played by Jason Schwartzman in the film), who wrote the Disney hits with his late brother Robert (B.J. Novak), is now 85 and was unable to make it to New York.

“Saving Mr. Banks” focuses on the power struggle between Walt Disney (Tom Hanks) and J.L. Travers to bring Mary Poppins to the screen. Disney pursued the writer for two decades to get the rights to her book to keep a promise to his daughter. The cranky Mrs. Travers fought him off until he finally wore her down and she finally ran out of money, which happened at about the same time.

Before the sing-along I asked Thompson if it was fun to play a crank.

“Yeah, it was great. We’re all so bloody well brought up. We’re constantly told from when we’re very little the please, the thank you, you know, often to express pleasure in moments and at things that we don’t really feel very genuine about, so there’s something authentic about her irritability, which I liked.”

As for working with Tom Hanks, she said, “It was bliss of course,” she said, adding, “He was a bit cranky but after I finished with a full-body massage he kind of warmed up. Once a day I’m fine with that.”

She recalled her own first impressions of L.A. were much like those of her movie character.

“I remember it so clearly. It was the only time that my dad had the money to take me and my sister to this very exotic place, and I was about 14. I’ll never forget it because there didn’t seem to be any people living in Los Angeles because no one walked. I thought, ‘Where is everyone?’ And then, ‘Oh my God! Look at the palm trees! And can you really buy bacon and mascara in the same shop in the middle of the night? It’s a weird place.”

Her favorite Mary Poppins song she told me was “Let’s Go Fly a Kite.”

“It’s an unbelievable song. It’s a sort of Mozartian song actually. You really feel like Dick and Bob picked some chord that sunk deep in the human collective consciousness because everyone tears up. It’s a very extraordinary piece,” she said. “It reminds you that in those days Walt Disney was surrounded by some of the greatest artists in the world, because they were all on the run from the f–king Nazis.”

She told me as a child she knew the book and the film were very different.

After the Oscar season ends in March, Thompson goes from playing grouchy Mrs. Travers in “Saving Mr. Banks,” to playing the murderous London baker Mrs. Lovett in the Stephen Sondheim-Hugh Wheeler musical “Sweeney Todd: The Demon Barber of Fleet Street” on the stage at Avery Fisher Hall.So was today’s sing-along a warm up for “Sweeney Todd”?

“Yes, this is a rehearsal, basically,” Thompson cracked.

Everyone did well with the more familiar “A Spoonful of Sugar,” and the well-known lyrics, “a spoonful of sugar helps the medicine go down.”

Thompson got film director Paul Haggis to join her for “Chim Chim Cher-ee,” and he relented. “Come on! You can do a really bad English accent,” she cajoled.