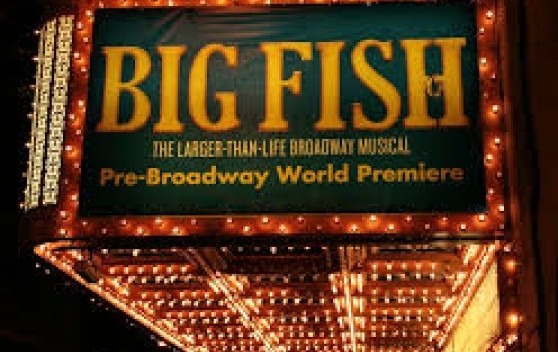 Broadway: The truly bad musical of the movie “Big Fish” will close on December 29th after 34 previews and 98 performances. How “Big Fish” made it this far is a mystery– as is how it will last six more weeks. Based on Tim Burton’s movie, “Big Fish” is one of those jaw dropping disasters you feel bad for. But everything about it was misguided and made no sense.

The worst part was the score by Andrew Lippa. There isn’t decent song. Didn’t anyone realize this before they went forward? None of the songs have choruses! Lippa should really not be allowed back to Broadway unless he can demonstrate an ability to write a song that might play on radio– any radio.

Two weeks ago “Big Fish” played at 68.9% capacity and took in just $647,165. This past week’s figures will be published tomorrow. They must be even worse.

“Big Fish” is the third new Broadway show to shut down quickly. “First Date,” a pedestrian musical, and “A Time to Kill,” a play based on John Grisham’s bestseller, preceded it in death.

What’s next? If it weren’t in a subscription theater, “The Snow Geese” would be shot by a hunter. The better-reviewed “Winslow Boy” also is struggling. By the looks of things, “Mamma Mia” may mercifully be near the end of its long run. Its own Waterloo may be January.

But Broadway is not all bad news. After Midnight (a must see) is doing very well, Betrayal is a huge hit, and the Beckett and Shakespeare plays are thriving.

One last word on “Big Fish”: Norbert Leo Butz can do no wrong. He should be the star of a USA Network show by now. Network TV has to give him, Steve Kazee and a few other Broadway stars their national breaks already.