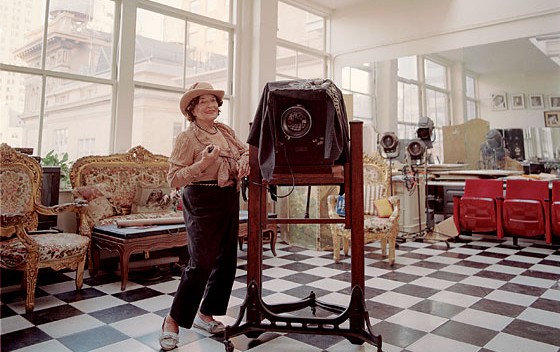 A note: Editta Sherman died this week. I met her when she was a young 90 back in 2001. I featured her in the special Oscar issue of Talk magazine for the 2002 Oscars. (Yes, Talk!) Jen Prodan, who worked for Talk, came with me and wrote the piece. Editta was larger than life. That she went on for 11 more years, still taking pictures, is amazing. We took some photos for that shoot, but I don’t know where they are. If I find them, I’ll put them up. In the meantime, here’s Jen’s story.

Number 1208 in the famed Carnegie Hall apartments looks like a movie set that might have been found on an old Hollywood studio back-lot: a black-and-white checkerboard floor runs from mirrored wall to mirrored wall. A cast-iron spiral staircase circles up to a loft aerie laden with various props and framed photographs.  A 50-year-old GA Century camera made of leather and mahogany waits beneath a bank of windows overlooking the backdrop of a rainy midtown Manhattan. And in the center of a veritable swarm of photographers, make-up artists, agents, writers and hangers-on, is celebrity portraitist Editta Sherman. At nearly 90 years old, she epitomizes this romantic era of Tinseltown, when actors and actresses truly were stars in the celluloid firmament.

Today, however, Editta finds herself on the other side of the camera lens. Ever the consummate professional, she stands at the ready in a burgundy vintage 1950s dress, two-inch heels, a glittering ruby-and-diamond necklace and a smile. As the make-up artist paints her lips a sultry red, her agent offers words of encouragement: “It’s Editta’s Hollywood! It’s Oscar! They’ll probably give you one next year!” However, she doesn’t seem to require much prodding: With a saucy kick of a rhinestone-encrusted heel and a flirty swish of her hemline, she lets out a cheeky, “Olè!”.  Whether sitting elegantly in a chair or lying on the floor, Editta is poised and natural in front of the clicking camera, surrounded by hundreds of her portraits of celebrities from a golden age of Hollywood gone by.

“I’ve been [in Carnegie Hall] 50 years,” Editta gestures broadly as she pours two champagne flutes of Diet Coke, and settles in to discuss her six decades as portraitist to the stars. Dubbed the “Duchess of Carnegie Hall” by author Bill Cunningham, Editta’s studio played host to a bevy of Hollywood’s best and brightest, from Jessica Tandy and Hume Cronyn to Susan Strasberg and Paul Newman to Fred Astaire and Ginger Rogers. “[Once] I was photographing [Bela Lagosi], and he was going out, and Somerset Maughm was coming in. They both greeted each other at the door. I couldn’t get over it.”

A second-generation photographer, Editta spent her childhood in a studio with her father, a professional photographer and an Italian immigrant. “I spent a lot of my young years in the studio helping my father,” she says. “It was my job to help him, and I used to watch him when he had his clients [come] in, the way he operated. He taught me a lot of things.”

At age 19, Editta landed her first job as a photographer’s assistant in Union City, New Jersey, taking pictures of young children and babies. Not long after that, she was introduced to her husband, Harold Sherman, an inventor and recording engineer for Dictaphone—10 years Editta’s senior.

“It was love at first sight,” she says with a quiet smile. Editta and Harold were married a year later and, suddenly, Editta found herself thrust into a whole new world—one of Hollywood and celebrities that would soon prove to be prophetic.

“I was shy in those days. [Harold] knew the people, the contacts,” she says. “It was a nice experience in those days. I was just getting started. When I got into [my husband’s] studio…there was a different clientele. I learned a great deal from him. He was an inspiration to me.” Regardless of the awe that struck her whenever her husband would take a meeting with someone she knew from the tabloids or movies, Editta’s focus was on her ever-growing family. “It was just a hobby, taking pictures.”

However, in 1943, circumstances forced Editta to turn to her hobby as a means of support. Diagnosed with diabetes years earlier, her husband Harold had become too sick to continue working at the Dictaphone Corporation. So, in 1943, Editta moved her family to Martha’s Vineyard, Massachusetts where she set up a small studio in her dining room.

“Most of my work started on Martha’s Vineyard. Frank Morgan [Professor Marvel/The Wizard in 1939’s The Wizard of Oz] came in on his yacht for a couple of days, and so he dropped in. His wife said he [was] never away from his pictures, not even on vacation.”

After returning to Manhattan two years later, Editta slowly began to build a reputation for herself—an extraordinary accomplishment for a woman in an industry ruled by men. “They didn’t give me as much credit. Of course, it was the 40s.  I was very young, for one thing, and here I was dealing with professional men.”

However, with the help of such famed screen stars as Raymond Massey and Tyrone Power—two of Editta’s earliest and most favorite portrait subjects—word of mouth proved to be the best form of self-promotion. During one sitting with Peyton Place star Lloyd Nolan, Nolan asked if she would like to do a portrait of fellow actor and friend, Charles Laughton. Editta, ever the enthusiast, immediately said yes.

“So [Lloyd] goes right to the phone, and calls [Laughton] up and says, ‘Get over here and get your picture taken.’ [Laughton] says, ‘I understand I’m to come over and have my picture taken. I might be cock-eyed drunk.’ I said, ‘That’s fine.’

After Harold’s early death in 1954, Editta persevered, continuing to take portraits of Hollywood’s stars as a means of supporting her five children. Editta developed a signature style of portraiture photography that allowed her to truly capture the essence of the person on the other side of the lens. Her ease with the camera propelled her into the spotlight, and she soon became one of the top celebrity photographers in the country.

With more than 2,500 photographs of everyone from Elvis Presley to Christopher Plummer, Editta rubbed elbows with the most famous actors of her time. Naturally, she has her favorites.

“Tyrone Power, of course, was one,” she says coyly of the swashbuckling film star with whom she had a very close working relationship.  “I used to do the ballet, [and] one time I did it here for Tyrone Power. He [sat] down and he smoked a cigarette. When I got finished [he said], “That was wonderful, Editta. He was in love with me.”

“That one,” she says, pointing to a portrait of Yul Brynner on the crowded far wall, “was [taken] right before he died. He couldn’t go on because he was in such bad shape, and yet he would.  He came here and could hardly sit. I didn’t know how bad he was.”

With a bastion of Hollywood’s most famous celebrities behind her, what does the future hold for Editta Sherman? Aside from making guest appearances with her photographs, she’d like to continue taking celebrity portraits—but only if the stars are “known.” Anthony Hopkins tops her list, along with Pia Lindstrom because “she’s the daughter of Ingrid Bergman.” Tom Cruise, she muses, would “like to come, I’m sure, and see some of the old stuff.” She’d also like to publish a book of all of her photographs; a book where Henry Fonda, Lillian Gish, Douglas Fairbanks, Jr. and Mary Martin might all be remembered in their days of youth. “Time goes on,” she says with a sigh as she looks out the window at a rain-soaked Manhattan, a lovely picture in itself. “Time goes on.”