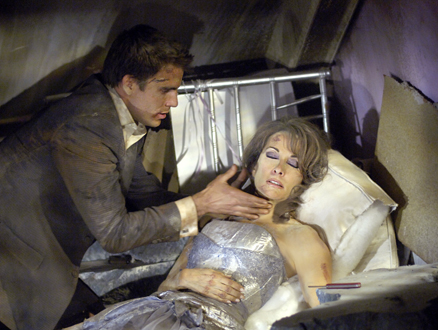 Stay tuned for updates: The online versions of “All My Children” and “One Life to Live” may be dead for good this time. Jeff Kwatinetz’s Prospect Park Productions is said to be on the verge of announcement that they’re done. The company built a big studio in Stamford, Connecticut, fought with the local IATSE union people, as well as other unions. They produced around 40 or episodes of each show.

But throughout the run of the shows on Prospect Park’s Online Network, via Hulu, the production company had problems. They almost immediately cut back the run from four episodes a week to two per soap, claiming “research” said viewers couldn’t keep up with the pace. Prospect Park also conducted an unnecessary fiat war with ABC, which licensed the show to them. Prospect said they had trouble writing “One Life to Live” because ABC had killed off three of their characters on “General Hospital.”

This argument was ridiculous since soap fans know soap characters can be killed off on camera and return several days later. (See “SoapDish” Kevin Kline, Whoopi Goldberg and “I can’t write for a man who doesn’t have a head.”)

Once Prospect sued ABC it gave them an excuse to “shelve” “One Life to Live.” Now the word is that on Friday they will do the same with “All My Children.” A union insider said they’ve heard Prospect Park is pulling out entirely.

Kwatinetz has a long checkered history in showbiz, well chronicled by Google, including the downfall of his agency The Firm, its successor agency with Mike Ovitz, his brief management of Kelly Clarkson and Britney Spears, rehab, and his engagement to the later Brittany Murphy. (If he’d used any of those story lines for the soaps, they might have stayed on the air.)

Considering the ratings rebound of soaps, and the terrible ratings from their replacements, ABC would do well to reboot the shows at 30 minutes apiece. Their “General Hospital” is booming now.