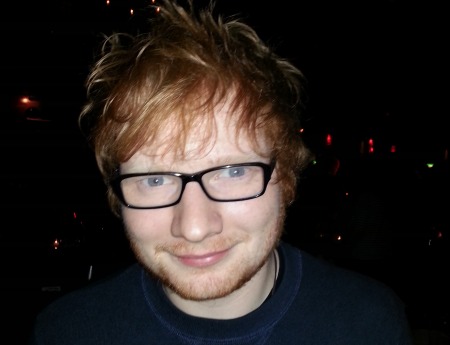 It was a wild night at the Cutting Room on East 32nd St. last night: famed record producer and manager Peter Asher’s one man show was so popular that owner Steve Walter had to open the dividing wall between the bar-restaurant and his rock club so everyone could see the show. Fans poured into all the Cutting Room spaces as Asher–who was a pop star as Peter & Gordon, discovered James Taylor for the Beatles’ Apple Records, and a hit last year from “Madagascar 3”–recalled his life story with his crack band and amusing rare videos and pictures.

But wait! Newish pop star Ed Sheeran was there on a furlough from his Madison Square Garden gigs. He enjoyed Asher’s show so much that Sheeran was a little annoyed by some old guys just behind him in an ante room all talking loudly to each other while Asher performed. So he got up and quietly shut the doors, leaving the old guys to their business.

What Sheeran didn’t realize: the “old guys” were the Rolling Stones’ Mick Taylor, Bad Company’s Simon Kirke, and the Kinks’ Dave Davies, all catching up with each other! The doors were re-opened, and the delighted Sheeran got to meet some of his rock idols.

Meantime, also in the audience were May Pang, Seymour Stein, actor Michael Murphy and Kathryn Altman, widow of director Robert Altman, as well as famed art dealer and co-founder of Rolling Stones Records (circa 1971) Earl McGrath.

Asher’s show, by the way, continues to be a hit. Last night he brought original Moody Blues member and Wings star sideman Denny Laine on stage to sing “Go Now” with the band. And Jeffrey Alan Ross, who leads Asher’s band, sang Badfinger’s “Baby Blue” in honor of its inclusion in the finale of “Breaking Bad.”

We also learned something no one knew before– that Mike Myers partially modeled Austin Powers on Peter Asher’s look from the 60s, big glasses, bangs and all!