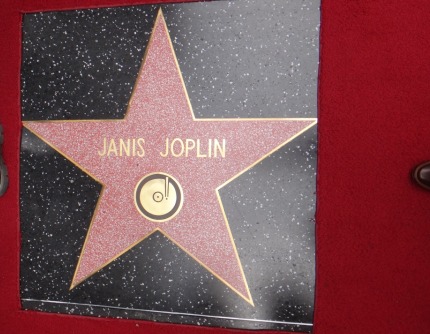 Janis Joplin got her star on the Hollywood Walk of Fame yesterday. Why was it only in 2013? Because no one had asked for it before. Recording industry legend Clive Davis, who signed Janis to Columbia Records in 1967, was on hand. So was Kris Kristofferson who wrote Joplin’s hit “Me and Bobby McGee.” He sang it at the ceremony on Hollywood Boulevard. You can hear-see him on the official video, with fans singing along.

Davis told me how he felt: “I’m so proud for the recognition of Janis and the sadness she’s not around us.”

Laura Joplin, Janis’s sister: “To celebrate with Kris, who was so important in her life, we don’t get many opportunities like that. Janis was successful because of her strength. She was ahead of her time.” Michael added, “She was right on time too, she couldn’t have done what she did at any other time.”

I asked how they felt about the upcoming biopic of their sister, to be directed by Lee Daniels and starring Amy Adams.

Laura said: “We would like a movie about her, it’s about time. I hope for the best.”

Mitch Davis, Clive’s powerhouse music entrepreneurial son, who is about to launch his own yet unnamed label told me, “This is a meaningful day for my father. He came here to keep her memory alive and wanted to be here for her legacy. Clive’s love of music has so much to do with her; she was his first major signing. Last week, he was on the ‘The Late Show’ and her name came up. She’s continuously reaching new generations of fans and is an iconic figure to music fans worldwide.”

Clive then told the crowd: “There has never been an artist like Janis. That was so evident from the first time I saw her on stage. She vibrated, the music going thru her whole body, throwing that unruly hair around and letting out that sound from deep in her gut. I can still picture it and I can still hear it four decades later. How truly revolutionary she was. It was obvious that she studied her blues and R and B predecessors, but she was something new.

“She did for women in rock, what Aretha did for women in soul. She broke all the rules for what was possible and permissible, she was pained and vulnerable. She was riveting. Our paths crossed that weekend in 1967. We bonded, and as I wrote in my book, she thought our relationship should be in more physical, traditional way. (which cracked up Kris.) It didn’t go that way, but it doesn’t mean our relationship wasn’t personal and intimate. She had her hopes and insecurities. I was completely prepared to be by her side for a very long time. I was filled with anticipation for what was coming down the road. It broke my heart when she died. I was angry, because she was depriving everyone of her life force.

“This contradictory chick from Texas was on top of the rock world. She was unapologetically herself. She helped change from what we perceive star quality to be. I’m so glad she’s here on the Walk of Fame. She’d be drinking Southern Comfort and having a good time. Artists from around the globe all still say that she was their inspiration. Her spirit is still with us. Nothing was the same for me after I first saw Janis Joplin.”