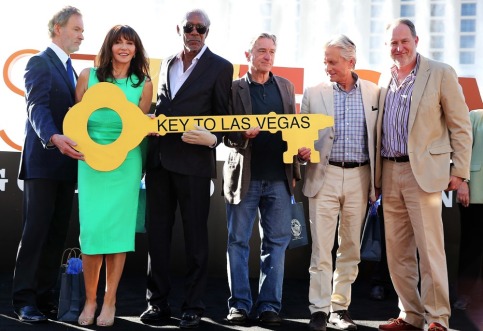 Review: Not every movie is for the Oscars. There’s something to be said for the big studio comedy that works. “Last Vegas” more than fulfills its promise.  Starring industry stalwarts and Academy Award winners all Morgan Freeman, Kevin Kline, Michael Douglas, Robert DeNiro, and Mary Steenburgen Jon Turteltaub’s whimsically directed flick keeps you shamelessly grinning from pretty much beginning to end.

The quippy script by Dan Fogelman and Adam Brooks is clever; full of laughs combined with affecting pathos, and keeps a jaunty and at times silly pace.  Childhood friends from Brooklyn, this rag tag quartet has had their share of ups and downs testing their friendship over the many years but have managed to keep glued together, as tenuous as its been.

The story begins with successful lifelong bachelor and most outwardly polished of the group, Michael Douglas’s Billy finally taking the plunge and getting engaged to a vacuous girl half his age.  He then convinces his buddies–Freeman’s Archie, recovering from a stroke in his New Jersey home, and Kline’s Sam–bored and living in Florida, to meet him in Vegas.  DeNiro’s Paddy is the toughest one to convince, he’s been living a hermetic life in a Brooklyn apartment since the death of his beloved wife.

But since this is a Hollywood movie and the story obviously has to move forward, curmudgeonly Paddy reluctantly agrees to come together once again with his boyhood pals and visit Sin City to celebrate with an old geezer bachelor party.  The trip brings up grudges and grievances, some long buried and some not, heals most, and gives light bulb moments to all four.  The softly sweet,  yet sassy and wise Mary Steenburgen, playing a lounge singer in a 3rd rate hotel, is a true stand out, which says a lot for this fine actress considering the company she’s keeping.

Sparky cameos from Broadway veteran Roger Bart and 50 cent, thrown in with the vagaries of Vegas including transvestites, the ubiquitous Cirque De Soleil performers and more, all happily add to the humor in this truly likable and funny film.

Unlike younger-skewing comedies, “Last Vegas” doesn’t talk down to the audience. The characters all like each other and we like them. Edgy? No. But for once the vulgarities are well placed. And it’s nice to see Morgan Freeman for the first time in a long while.