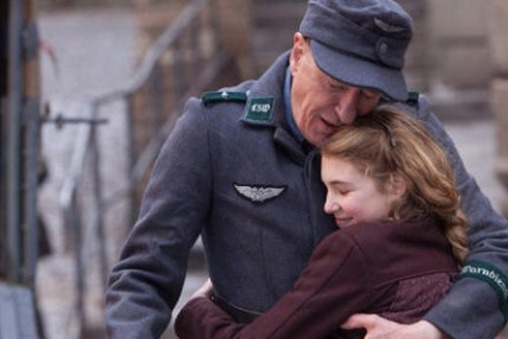 It’s a bit of a shock, but probably not so much to regular movie goers. Toward the end of Brian Percival’s adaptation of “The Book Thief,” there’s a jarring image. The camera sweeps over a group of framed family photos on a piano with vistas of Central Park West just beyond. The pictures are of people we’ve seen in the long period piece of a movie: the main character, her family, Holocaust survivors and victims.

And there, among the misty memories, is a sleek new iMac computer.

The black and silver of the computer, with the Apple logo, shine in the gauzy afternoon sun as the audience is asked to recall, sentimentally, all these people who suffered horrors at the hands of the Nazis.

Yes, I do believe it’s a 17″ inch screen. I didn’t get a chance to check the model and serial numbers. But I was thinking, as “The Book Thief” came to an end, I am ready for an upgrade.

Wipe away those tears.  Apple has turned “The Book Thief” into iHolocaust.

The meaning of this is clear: Apple has paid a handsome amount for a prominent product placement. “The Book Thief” runs at least two hours, and for most of that time it takes place in Germany from 1940 to 1945. Based on the bestselling novel, it tells the implausible story of how a 12 girl survives the deaths of everyone around her.

In the last few minutes–this isn’t a spoiler since 10 million people have read the book–we learn that she became a great writer with a magnificent Fifth Avenue apartment. And placed prominently in that apartment is one well known high tech piece of equipment: an Apple computer.

Lots of movies have product placements. They are obvious. Papa John’s pizza, regularly sneaked into movies, is all over Ben Stiller’s “The Secret Life of Walter Mitty.” Apple and Dell are frequently seen logos on laptops that turn up in TV series and movies. But they’re usually in context of someone using a laptop. In certain kinds of projects, the product placement is begrudgingly accepted. In so-called serious movies, however, this is a no no.

In the case of “The Book Thief,” there is no context. The black and silver Apple logo is just dropped in. The iMac is like a spaceship among lavender and lace. Did I mention that the owner of this iMac was 90 years old? A manual Underwood typewriter might have been more believable as a prop. Or some lovely pens.

I rather doubt director Percival was trying to convey the message that a new iMac is the reward for surviving the Holocaust. But the crassness just explodes, especially at the end of a movie that requires total suspension of disbelief in order to buy the story.

I was just thinking, How would they have handled this in “The Reader”? Could Ralph Fiennes’s son have recounted the trial of  Kate Winslet while showing pictures on his iPhone? Maybe in a revised “Schindler’s List” Oskar Schindler’s grandson could have listened to interviews with survivors on an iTouch. Even better: in “12 Years a Slave” Solomon Northrup’s great great daughter could have done research about his experiences on the iPad mini. Or better yet, asked Siri for advice.