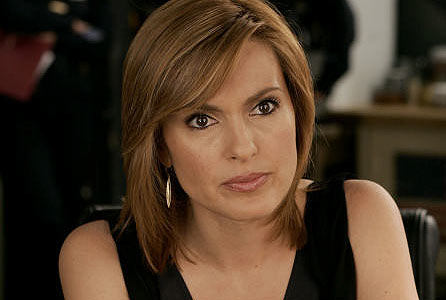 Mariska Hargitay has a lot of reasons to be happy. I ran into her and actor husband Peter Hermann last night as they returned from watching her niece participate in a Boston regatta. “It’s a five hour drive!” Mariska cried. “But it was exciting.” The Hermanns were among the many celebs who wandered into the very exclusive Bar Centrale in New York’s theater district.

We talked about “Law & Order SVU”‘s ratings comeback. Over at tvbythenumbers.com, the experts say the show will definitely be renewed for fall 2014. “We’re on a roll,” Mariska said. “The ratings have been great and so have the reviews.” The season opener was a huge hit on both fronts, and set the tone for a hot season. They’ve already done shows about Paula Deen, Trayvon Martin, and Anthony Weiner.

Meanwhile, Peter has a big role in “Philomena” starring Dame Judi Dench and Steve Coogan. The much acclaimed film opens at the end of November.

Also at Bar Centrale: British superstar Stephen Fry, who’s starring in alternating Shakespeare plays opening soon. And Bill Pullman came in with his wife Tamara. They’d just come from seeing “The Glass Menagerie” with Zachary Quinto and Cherry Jones. Minutes later, Quinto walked in with agent Bryan Lourd. It was that kind of night. Pullman, by the way, is an all star off Broadway production this fall with Ed Harris and Amy Madigan called “The Jacksonian.” And oh yes, Marin Ireland was entertaining her parents after a performance of “Marie Antoinette.”

And that’s how New York rolls on a Tuesday night.