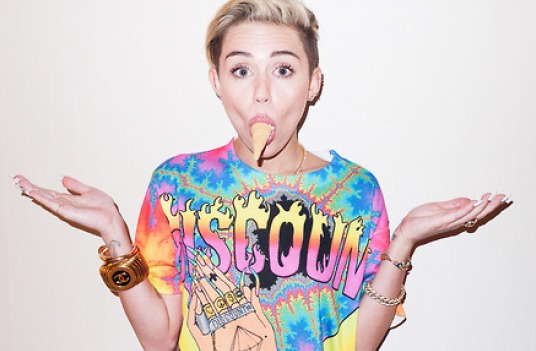 Miley Cyrus’s raunch campaign has paid off. Her “Bangerz” album debuts this week at number 1 with over 273,000 copies sold. Is this what it takes to sell a CD? She had the VMA’s scandal with Robin Thicke, lots of photos with Terry Richardson, and countless smaller opportunities to shock and disgust. Her videos were considered “scandalous,” too. Plus she had the cover of Rolling Stone. And here we are. Is “Bangerz” the “Tapestry” of her generation? Haha. Hardly.

Miley knocked Justin Timberlake off number 1, where he was perched with “20/20 Part 2.” Timberlake took quite a tumble, to number 2. The “Glee” cast has an album out to cash in on Cory Monteith’s death (that was fast, I give them credit) which sold 47K. It’s just six songs that you can download on iTunes from the episode in which Finn has died. “Glee” fans– who do you think the money is going to? Not charity. Strangely, Bob Dylan really benefits from Lea Michele singing “Make Me Feel Your Love.” I wonder if Dylan knows “Glee” exists.

Elsewhere, I am happy to see Elton John’s “Diving Board” still doing well. And Cher should be commended. Her “Closer to the Truth” hangs in there.

Otherwise, sales for physical and digital are way down. Is everyone using Spotify and Pandora? Is the music so disposable that fans no longer need to own it, just rent it? I’m just getting rid of over 1,000 45 rpm records from the 60s and 70s, and I am heartbroken. Holding those records in your hands was so important. I guess not anymore.