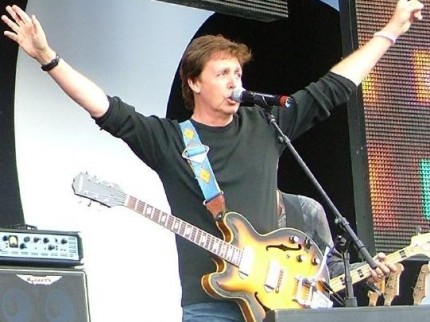 Paul McCartney’s “New” is his first new album since “Memory Almost Full” seven years ago. That album was the second in a row– after “Chaos and Creation in the Backyard”–that brought McCartney back to a real, authentic voice. He was over 60 by then, and coming out of a terrible divorce. He was already the most popular and successful singer, player in rock history. Why bother doing anything else?

But McCartney is an interesting guy. He never stops, and doesn’t really look back. He plays his hits in concert, but he keeps making new music. Since “Memory” he made an Electric Fireman album, an experimental side project featuring a legitimately great song, “Sing the Changes.” He’s made a couple of singles with cutting edge groups. He played with the Foo Fighters as a faux Nirvana. It wasn’t all good, but at least he tried it. He could really stay home and sheer sheep, collect Beatles royalties, etc.

So I give him a lot of credit. “New” is a 9 out of 10. It’s got too many good songs and interesting production to not listen to it. It’s better than almost anything by anyone fifty years his junior. Almost no one has McCartney’s sense of melody and hook, his purely original compositional skill. He’s not always the greatest lyricist but he’s good enough. And he can be very witty. I’ve been enjoying one track, called “Looking at Her,” which he probably thinks is a throwaway. It’s not. It’s a little gem.

I’d love to give you some examples of these songs, but I’ve got nothing. No clips on Soundcloud. Nothing on YouTube. I only got the review copy on Friday. So I don’t know, listen to the 90 second samples on iTunes or Amazon.com.

The title song, “New” also seems like puff. But it’s also like a little gift, a Beatle-esque uptempo number that you can’t forget after one play. And the jauntiness of the music is juxtaposed with a kind of bittersweet lyric. It’s no silly love song. And the production throughout is stellar. Mark Ronson, Ethan Johns, and Giles Martin divided up the work.

All of their tracks are reminiscent of McCartney’s best solo albums, like “Band on the Run” or the very underrated “Flaming Pie.” But they’re also modern enough to give Paul a contemporary sound. If radio existed, and were open, they’d play some of these songs. Instead, pop radio is filled with the junk of fabricated music.