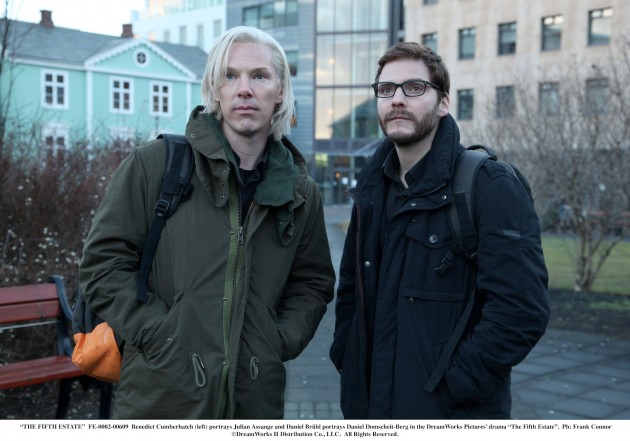 Bill Condon’s “The Fifth Estate” opens on Friday, right after Julian Assange wrote an open letter to actor Bendedict Cumberbatch on his website.  Thank goodness because the movie, which slows down in some areas, is desperate for a scandal or any other kind of publicity. The WikiLeaks episode already seems very old and something vague that happpened in the past. The movie doesn’t help.

Part of the problem with “The Fifth Estate” is that there’s no one to root for. This isn’t Watergate, the Pentagon Papers, or “All the President’s Men.” There are no heroes. Assange, played very well by Cumberbatch, comes as a composed lunatic. The US government– well represented by Laura Linney and Stanley Tucci– seems more sympathetic but not much. The journalists involved aren’t very likable and never make a good case for their release of the Wikileaks material.

I did worry about Alexander Siddig, who plays an Arab diplomat whose cover might be blown by the WikiLeaks reveals, but I was mostly wondering why he doesn’t work more. He’s a very good actor.

One thing about Laura Linney: she’s like a bright spot in dark dream. She lights up the conference room where she plays a higher up at the Department of Justice. Anthony Mackie also stands out in a smaller role.

The only possibly sympathetic character: Daniel Berg, the WikiLeaks spokesperson, played with usual understatement by Daniel Bruhl. Along with his performance in “Rush,” Bruhl is making a big splash this fall in American cinema.

Unfortunately, Berg is no better than Assange. The two of them, along with Bradley, er, Chelsea Manning, and now Edward Snowden, are enemies of all states (except Ecuador and Russia). Their revelations did not instigate a revolution or the toppling of a president. They come off the movie as troublemakers. And Assange, ultimately as a made man.

But there is some disconnect in “The Fifth Estate.” We’re never sure why we should care about all this. Obviously, we’re watching the film. The unleashing of thousands of secrets has had no immediate effect on the American people. We are more upset that Kris Jenner may have been cheating on Bruce. The secrets of governments? Not so much.