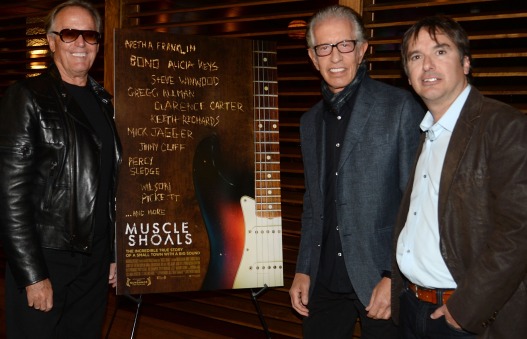 Muscle Shoals is a small town in Alabama which is unknown to most Americans but certainly not to music lovers.  Located alongside the Tennessee River, Muscle Shoals is the breeding ground for some of American and as it turns out, British, creatively inspired music.  The River is called “Singing River” by Native Americans, that river is supposedly the source of its’ musical inspiration.  Director Greg Camalier and Producer Stephen Badger brilliantly bring the story of this unlikely musical oasis town to life.  Cameos by Aretha Franklin, Wilson Pickett, Mick Jagger, Gregg Allman, Keith Richards, Bono (who didn’t record there but is a fan) and more, show what a vital part this tiny town had in shaping American music.

Richard Perry told me, “It’s a chronology of the story of the music business. It tells the story of a man, Rick Hall, who started from nothing in a little town in Alabama and turned it into one of the most important recording centers in the world.  It’s a story of triumph and tragedy. He had a lot of tragedy in his life and he prevailed. So it’s a very inspiring movie.”

Peter Fonda added, “Seeing how it all came together is a great history lesson.  While that lesson is being taught we’re being entertained by some of the greatest songs ever put down, all centered in the Blues.  All rock and roll comes from the Blues.  You wouldn’t get people like Keith Richards and Mick Jagger to come to Muscle Shoals to record without them knowing that there was heavy metal there, I’m talking heavy water meaning the Tennessee River which is  radioactive musically.

“I don’t mind getting radioactive burns from this kind of film.  I want the whole world to see this movie.  It’s a national treasure.  It’s so good and at its’ heart, really pure American.  With Keith and Mick and even Stevie Winwood, all doing their thing.  The fact that all this footage is still around is unreal.  I’ve seen this film six times.  I’m going to keep on touting this movie, it’s just not hard to do.  I really dig this music.”

Director Greg Camalier told me how the film came about.  “We stumbled on this town.  My best friend and I who made the film together, Stephen Badger, were driving through and we quickly learned about it and were blown away.  We started to research it and discovered the luminous contribution to American music this town has made.  We knew we had to tell this story.”

Tommy Chong said: “I just finished a film where I played God called, ‘It’s Gawd,’  When I’m not playing God I’m touring with Cheech, which is kind of the same.”

‘Muscle Shoals’ is available on VOD and opens in LA at the Nuart  on Oct 11th.