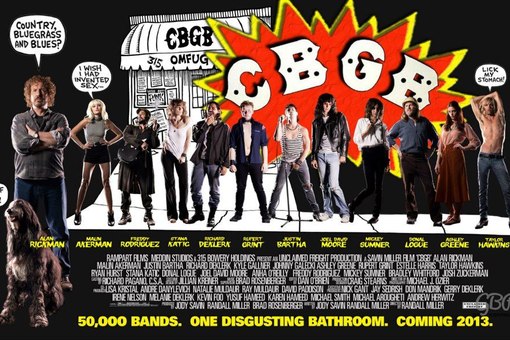 Madonna didn’t show up but she did send an email as her mentor, Seymour Stein, received the first ever CBGB Icon Award last night. A couple hundred record industry types came down to the Bowery Hotel, where Stein’s long long time friend and colleague producer Richard Gottehrer  presented the award to Stein, founder of Sire Records.

Madonna was more interested in being photographed at the “12 Years a Slave” premiere than showing up for the man who discovered her and made her what she is today. But she did send that email.

Mandy Stein, Seymour’s daughter and the director a CGBG’s documentary called “Burning Down the House,” read Madonna’s email tribute to Stein. He signed her at Sire Records in 1983, and the rest is history. Gottehrer told the story of how Sire Records was born, and how and he Stein used to travel to Europe to pick up acts no one wanted. The result was a lot of hits from “Ode to Billie Joe” to Sweden’s Focus playing the instrumental “Hocus Pocus.”

Eventually Stein picked up the Ramones, Talking Heads, Blondie, and the Pretenders. Now all of them including Stein himself are in the Rock and Roll Hall of Fame.

After the awards ceremony, everyone headed over to the Sunshine Landmark Theater for the premiere of Randall Miller’s “CBGB” movie and opening night of the CBGB Film and Music Festival. The movie is a tribute Hilly Kristal, who’s played with perfect eccentricity by Alan Rickman. There are several outstanding supporting performances, too, from Freddy Rodriguez as a junkie Hilly takes in at CBGB, to Mickey Sumner’s ragged, spot on turn as Patti Smith. Ahna O’Reilly is quite good as Mary Harron, and I really liked Harry Potter’s Rupert Grint and Jusin Bartha, respectively, as Cheetah Chrome and Stiv Bators of the Dead Boys.

The music is great, and it was fun for me to relive some personal history. But Miller and screenwriter Jody Slavin have made more of a docudrama and than a movie. After a while, the whole thing just sort of dribbles down to an ending. Very little is really fleshed out. And there are time line errors– Patti Smith was not singing “Because the Night” at CBGB in 1975. Sumner is so good I wish they’d let her do something from “Horses.”

At least there is a movie, and Hilly Kristal will not be forgotten. The people who put him out of business will never have a movie made about them, that’s for sure. And the CGBG spirit lives on.