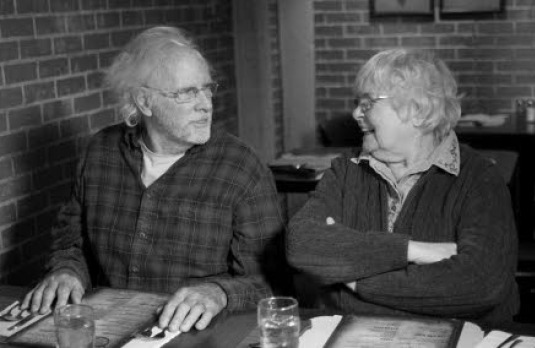 June Squibb– you may remember her from Alexander Payne’s “About Schmidt” as Jack Nicholson’s wife. She was so good in that 2002 movie that her career took off. The now almost 84 year old actress moved to Los Angeles and became a regular on “The Ghost Whisperer,” “The Young and the Restless” and lots of TV shows.

But now she’s back with Payne and stealing the show in his wonderful “Nebraska.” This black and white gem showed in Cannes and opens tonight at the New York Film Festival. Squibb is spot on as the wife of Bruce Dern’s Woody Grant. Dern, Squibb, and Will Forte, who plays their son, are all easily Oscar candidates. So is the film, Payne, and the screenplay. And let’s not the black and white cinematography.

Squibb is so hot now she’s been signed to play Hannah’s– Lena Dunham’s– grandmother in “Girls” for the coming season. I hope she has time for it. She’ll be doing a lot of promotion for “Nebraska.”

Last night Paramount screened the film, then hosted a spur of the moment gathering at their HQ pre-NYFF. All the principals were there. I also ran into two beloved and favorite New York theater (and often TV) actresses, Harriet Harris and Jan Maxwell, as well as the great Jessica Hecht. Plus, the film was introduced by legendary Mary Louise Smith, who plays Squibb’s sister in law in “Nebraska.” The movie opens November 15th.

Bruce Dern is 77 and seems like a lock for Best Actor nomination. Best Actor is now a dogfight. We have Dern, Hanks, and Redford. We also have Forest Whitaker, Chewitel Eijofor, and Idris Elba. Then there’s newcomers Oscar Isaac and Michael B. Jordan. Wait! What about Matthew McConnaughey. This is going to be insane. They all deserve, each one of them.

Dern told me he watched “Nebraska” last week with some old friends– Jane Fonda and Haskell Wexler. They made “Coming Home” together in 1977. He was nommed for Best Supporting Actor, his only Oscar nomination. So he screened “Nebraska” with them for good luck. I think it will work.