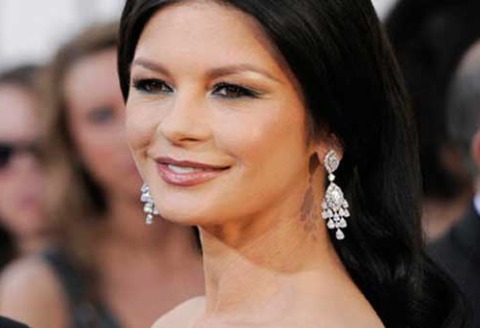 My favorite thing about the Broadway opening of “Big Fish” on Broadway last night–besides Norbert Leo Butz’s magnificent work as the younged down Albert Finney character: chatting with Catherine Zeta Jones. She looked like a million bucks, was in a great mood, and enjoyed the show immensely. She came with Universal Pictures’ chief Ron Meyer and his good friend, producer Bill Haber– two guys once ran with Creative Artists Agency with Mike Ovitz.

CZJ is really a beauty, and it was nice to see her off duty–just as a guest, not promoting anything. I was standing in a row of seats in front of this gang at intermission. All of a sudden CZJ decided she wanted to stretch her legs. Luckily, they are long. She literally stepped over the backs of the chairs and into my row with incredible panache. She’s a dancer, after all. Coming back, she did the same thing again! No standing on ceremony!

Sitting just behind this group in the Neil Simon Theater: Regis and Joy Philbin double dating with Michael and Laurie Gelman. At the end of my row: Zach Braff with his beautiful blonde girlfriend, Taylor Bagley. At the end of the emotional show I ran into Marisa Tomei. “I cried!” she said, wiping away tears.

Around in the audience, plenty of New York icons and theatre types, from Whoopi Goldberg to Harvey Weinstein and so on. Right after the show I ran into Paul Haggis, who’s been in this column more times this week than Sting!

“Big Fish” by the way rests entirely on the magnetism of Butz, and the incredible choreography of Susan Stroman. She literally works magic on the stage. I was not a fan of Andrew Lippa’s monotonous songs. But Kate Baldwin sings one called “I Don’t Need a Roof” toward the end which should have been the template for all the others. It’s beautiful, and she’s lovely.

PS: No I did not look to see if CZJ was wearing a wedding ring, and we did not discuss anything like that. No one else did. It was just nice to see her looking happy and healthy. She’s a good egg.